No evidence of damages to Christian sites in Maaloula 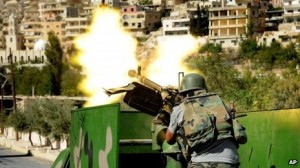 According to a report by BBC correspondent in Syria the battle between the rebels and forces loyal to Bashar al Assad for the ancient Christian town of Maaloula 55km (34 miles) north of Damascus is continuing, despite reports that government forces had retaken it.

But contrary to the media reports , BBC correspondent Jeremy Bowen said he had not seen evidence confirming religious sites had been damaged by al-Qaeda-linked jihadists.

Fighting over the town, began last week after rebels attacked a checkpoint.

Free Syrian Army (FSA) units and members of the jihadist al-Nusra Front occupied Maaloula for several hours on Thursday before withdrawing when their positions were bombed by government warplanes.

Then on Sunday, activists said government soldiers and pro-government militiamen had been forced to pull back to the outskirts following a fresh rebel assault.

Since then, most of the town’s 3,300 residents have fled to safer parts of the country including Damascus, where some told the BBC that three people had been killed and six kidnapped.

The town’s residents fled in a hurry to Damascus when the rebels first moved in. They are very upset and angry about what happened and claimed that al-Nusra fighters had desecrated churches and statues.

But Bowen who is in Maaloula has seen statues in churches which were left undamaged. In fact, he reported that he could see a big statue of the Virgin Mary that is very much intact.” 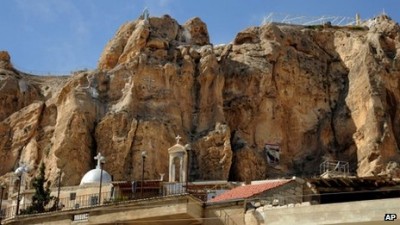 Maaloula has several churches and important monasteries, including Deir Mar Takla, which is visited by many Christians and Muslim pilgrims.

Inscriptions found in some of the caves in the mountainside on which the town sits confirm it as one of the earliest centers of Christianity in the world, and some residents can still speak Aramaic, the language of Jesus Christ.

The rebels declared on Tuesday that they would withdraw from Maaloula provided that pro-government forces did not take their place.

“To ensure no blood is spilt and that the properties of the people of Maaloula are kept safe, the Free Syrian Army announces that the town of Maaloula will be kept out of the struggle between the FSA and the regime army,” a spokesman said in an online video.

The spokesman for the Qalamun Liberation Front, which groups several anti-regime forces of the Qalamun area near Damascus, said the withdrawal was “conditional” on the Syrian army also agreeing not to enter the town.

“The army and its shabiha (militias) must not enter into the town,” said the unnamed spokesman.

But heavy fighting was continuing on Wednesday afternoon when Bowen arrived in Maaloula.

He said both government soldiers and local members of the National Defense Forces, a pro-government militia, were still exchanging fire with al-Nusra fighters inside the town. He also saw half a dozen government casualties being taken away for treatment.

The fighting in Maaloula has highlighted the delicate position of Syria’s Christian minority.

When the uprising against President Bashar al-Assad erupted in March 2011, many Christians were cautious and tried to avoid taking sides, despite the fact that it was peaceful.

However, as the crackdown by security forces intensified and opposition supporters took up arms, they were gradually drawn into the conflict.

Many fear that if the secular government is overthrown, they will be targeted by Sunni jihadist rebels calling for the establishment of an Islamic state and that Christian communities will be destroyed, as many were in Iraq after the US-led invasion in 2003.

The Syrian government is trying to give the impression that the rebels are “ferocious monsters that want to devour minorities,” Samir Nashar , a member of Syria’s main opposition the Syrian National Coalition SNC said in a Sept. 8 statement, adding “The regime wants to portray what’s happening as a revolution of extremists and not a freedom-seeking uprising.”

The Syrian regime reportedly used “tank and rocket fire” to target the buildings of Maaloula.

A spokesman for a key rebel battalion involved in the takeover said on Wednesday that the decision to withdraw applies to all opposition fighters, including the jihadist al-Nusra Front.

“Some Al-Nusra fighters were involved in the battle, but for the most part they were Syrians, not foreign (jihadists). The decision to withdraw applies to all fighters, and doesn’t exclude al-Nusra,” spokesman Ibrahim al-Idelbi of Ahfad al-Rasul told AFP.

Idelbi accused the Syrian army of bombing the town after opposition fighters entered it in order to try to discredit the rebels.

“The regime wants to portray us as extremists, but we would not target any sacred places,” Idelbi said.

“We have withdrawn from Maaloula because we want to show that our goal is not to destroy but to liberate,” Idelbi said. “We will stay on the edges of Maaloula, but residents who have left the town can, of course, return safely.”