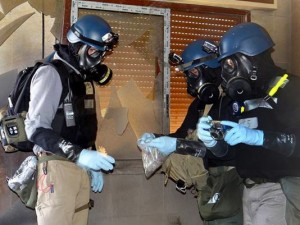 The proposal for Assad to turn over his chemical weapons has an odor of snake oil about it. All the same, it’s an opportunity the U.S. must try to exploit, and aggressively so.

Russia, longtime patron and protector of the murderous Syrian regime, now says it will pressure Damascus to surrender control of its chemical weapons — a proposal Syria itself quickly accepted.

As with any too-good-to-be-true offer, however, the question is: What’s the catch?

Until Russia trotted out its eye-popping proposal Monday — in response to a seemingly offhand remark by Secretary of State John Kerry — it had been nothing but an obstructionist, protecting its lone remaining Middle East ally while making trouble for the U.S. at nearly every opportunity.

Syria, meanwhile, has yet to even admit that it possesses the chemical weapons it now says it’s willing to give up.

So it’s easy to see why Kerry reacted skeptically to the offer, even as an assortment of allies, members of Congress and others jumped on board. The whole thing has an odor of snake oil about it — a prelude to stalling tactics that would preserve the horrific status quo.

All the same, it’s an opportunity the United States must try to exploit — and aggressively so.

President Obama, sounding like a man who had just been handed a lifeline, told TV interviewers Monday night he would do just that. He even suggested that the initiative was not the surprise it seemed, but rather a concept that he and Russian President Vladimir Putin had been discussing for some time.

Regardless, the changed circumstances give Obama an opportunity to recalibrate a deeply troubled policy.

Much as Syrian President Bashar Assad’s flagrant use of chemical weapons in the face of U.S. warnings requires a response, it no longer requires an instantaneous one. Thanks to Obama’s uneven handling of the situation, Assad has already had time enough to hide his assets or place them amid civilians. Votes in Congress can wait while the opening is explored; better yet, Congress can give Obama leverage by granting permission to attack if Syria doesn’t follow through.

The price is that even in the best case, it would take months if not years to reliably bring Syria’s massive chemical stockpile under the United Nations’ control, and Assad could use that time to continue the slaughter that has already killed more than 100,000 Syrians by more conventional means.

But no one has a good solution to Syria’s raging conflict, and a U.S. attack was always conceived as a last resort. Now there is another possible option — one that could attain a goal the U.S. had sought for decades before the Syrian civil war began more than two years ago.

For now, it is at least a productive offramp from a policy that had spun out of control.