Obama on Syria: We need to keep the pressure on Assad 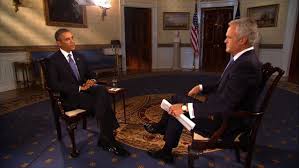 In an interview Monday, US President Barack Obama responded to a surprising late proposal that could head off a military strike against Syria. The Syrians agreed to a Russian proposal to put their chemical weapons under international control and destroy them.

I talked to President Obama about that, and about a threat Syrian dictator Bashar Assad made during an interview with Charlie Rose.

SCOTT PELLEY: Can you accept the Russian/Syrian proposal?

PRESIDENT OBAMA: Well, we don’t know the details of it yet. But I think that it is a potentially positive development. I don’t think that we would’ve gotten to the point where they even put something out there publicly, had it not been — and if it doesn’t continue to be a credible — military threat from the United States and those who support Syria’s responses to what happened inside of Syria. But, you know, my central goal throughout this process has not been to embroil ourselves in a civil war in Syria.

I have shown great restraint, I think, over the last two years, despite the heartbreak that’s happened there. But what I have said is that the ban on chemical weapon use is something that is of U.S. national interest. It protects our troops, so that they don’t have to wear gas masks whenever they’re in theater, the weapons by definition are indiscriminate and don’t differentiate between somebody in uniform and a child.

And when we see images of 400-plus children being slaughtered without a mark on their body through these weapons, I think it is important for the international community and the United States to stand up and say, “This cannot happen.” Now the good news is I think that Assad’s allies, both Russia and Iran, recognize that this was– this was a breach, that this was a problem.

And for them to potentially put pressure on Assad to say, “Let’s figure out a way that the international community gets control of– of– of these weapons in a verifiable and forcible way” — I think it’s something that we will run to ground. So John Kerry will be talking to his counterparts in Russia, we will contact the U.N. Security Council members as well as the Secretary General of the U.N. And let’s see what happens over the next several days to see if in fact what they’re talking about is realistic.

SCOTT PELLEY: What do you need to see in a diplomatic deal?

PRESIDENT OBAMA: Well, as I said, the key is — to paraphrase Ronald Reagan, that we don’t just trust, but we also verify. And so the– the importance is to make sure that the international community has confidence that these chemical weapons are under control, that they are not being used, that potentially they are removed from Syria and that they are destroyed. And there are a lot of stockpiles inside of Syria, it’s one of the largest in the world.

Let’s see if they’re serious. But we have to make sure that we can verify it and enforce it, and if in fact we’re able to achieve that kind of agreement that has Russia’s agreement and the Security Council’s agreement, then my central concern in this whole episode is resolved. It doesn’t resolve the underlying terrible conflict in Syria.

“Let’s see if they’re serious. But we have to make sure that we can verify it and enforce it, and if in fact we’re able to achieve that kind of agreement that has Russia’s agreement and the Security Council’s agreement, then my central concern in this whole episode is resolved. It doesn’t resolve the underlying terrible conflict in Syria.” President Obama told SCOTT PELLEY of CBS

And, you know, that I’ve always said is not amenable to a military solution. We’re gonna have to get the parties to arrive at some sort of settlement. But this may be a first step in what potentially could be an end to terrible bloodshed, and millions of refugees throughout the region — that is of deep concern to us and our allies.

SCOTT PELLEY: Is the only agreement you would accept one in which we can be assured that all of Syria’s chemical weapons are destroyed?

PRESIDENT OBAMA: I– you know, I think it’s premature for me to start drafting language. I think I want to see what exactly is being proposed, and in the interim, it is very important for Congress and the American people to recognize that we would not be getting even ticklers like this if it weren’t for the fact that we were serious about potentially taking action in the absence of some sort of movement.

And so we– we need to keep the pressure on, and tomorrow I’ll have the opportunity to explain to the American people just why it is that this chemical weapons ban is so important. It’s it in part humanitarian. Any parent who sees those videos of those children being gassed I think understands what a human tragedy it is.

But I want people to understand that this ban that almost every country in the world has signed onto and has been observed in conflicts around the world is something that helps protect our people, our troops. You know, it means that there’s less production of chemical weapons, which means it’s less likely to fall into the hands of terrorists who would have no compunction about using it in the United States of America. And that norm is worth protecting, particularly if we can do it in a limited, surgical way that does not involve troops on the ground or a long air campaign that would be both costly and could draw us into this long-term conflict.

SCOTT PELLEY: What could Syria do right now to show its good faith?

PRESIDENT OBAMA: Well, you know, I think the first thing that we’re gonna want to see is both the Russians and the Syrians putting a serious proposal on the table, and let’s take a look and see what it says.

SCOTT PELLEY: Assad essentially put you on notice today. In the interview with Charlie Rose, he said of the United States, “If you strike somewhere, you have to expect the repercussions somewhere else in a different form, in a way that you don’t expect.” He brought up 9/11 as an example of the kind of thing America did not expect. Do you take that as a threat?

PRESIDENT OBAMA: Well, I mean, I think it was intended as a threat. I don’t take it as a credible threat in the sense that Mr. Assad doesn’t have the capacity to strike us in a significant way. Some of his allies like Iran and Hezbollah do have the capacity to engage in asymmetrical strikes against us. Our intelligence, I think, is very clear that they would not try to escalate a war with us over limited strikes to deal with this chemical weapon issue.

Keep in mind, Iran was subjected to chemical weapons use by Saddam Hussein. So the Iranian population thinks chemical weapons are terrible and probably consider what Assad did to be a grave mistake. So I don’t think they would start a war with us over that. But what is true is that, you know, our embassies in the region, U.S. personnel in the region, they’re always potentially vulnerable to asymmetrical attacks. But the truth of the matter is, those threats already exist from a whole range of groups. And we understand what those threats are and take those precautions very seriously.

SCOTT PELLEY: Mr. President, the administration has described evidence to the American people and the world but it hasn’t shown evidence. And I wonder at this point, what are you willing to show? What are we going to see in terms of the evidence that you say we have?

PRESIDENT OBAMA: Well, keep in mind what we’ve done is we have provided unclassified evidence. But members of Congress are getting a whole slew of classified briefings. And they’re seeing very directly exactly what we have. Keep in mind, Scott, that the– this is not a problem I’m looking for. I’m not looking for an excuse to engage in military action.

And I understand deeply how the American people, after a decade of war, are not interested in any kind of military action that they don’t believe involves our direct national security interests. I– I get that. And members of Congress I think understand that. But in this situation where there’s clear evidence that nobody credible around the world disputes that chemical weapons were used, that over a thousand people were killed, that the way that these weapons were delivered makes it almost certain that Assad’s forces used them, when even Iran has acknowledged that chemical weapons were used inside of Syria.

In that situation, I think the issue is not the evidence — most people around the world are not questioning that chemical weapons were used. I think the question now is what– how does the– how does the international community respond. And I think it is important for us to run to ground every diplomatic channel that we can. There’s a reason why I went to Congress in part to allow further deliberation, not just here domestically but also internationally.

But I think it’s very important for us to make sure that we understand this is important. And if the American people– are not prepared to stand up for what is a really important international norm, then I think a lot of people around the world will take that signal — that this norm is not important.

SCOTT PELLEY: The people aren’t with you.

PRESIDENT OBAMA: Yeah, well, not yet. And I, as I said, I understand that. So I’ll have a chance to talk to the American people directly tomorrow. I don’t expect that it’s gonna suddenly swing the polls wildly in the direction of another military engagement. If you ask the average person — including my household — “Do we need another military engagement?” I think the answer generally is gonna be no.

But what I’m gonna try to propose is, is that we have a very specific objective, a very narrow military option, and one that will not lead into some large-scale invasion of Syria or involvement or boots on the ground, nothing like that. This isn’t like Iraq, it’s not like Afghanistan, it’s not even like Libya. Then hopefully people will recognize why I think this is so important.

And that we should all be haunted by those images of those children that were killed. But more importantly, we should understand that when when we start saying it’s okay to — or at least that there’s no response to the gassing of children, that’s the kind of slippery slope that leads eventually to these chemical weapons being used more broadly around the world. That’s not the kind of world that we want to leave to our children.