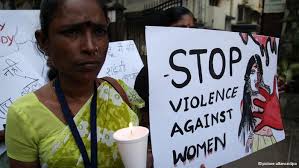 Almost a quarter of men surveyed in a UN report looking at violence against women in parts of Asia have admitted to committing at least one rape.

Rape was particularly common within relationships. However, one in 10 men admitted raping a woman who was not their partner.

It is the first multi-country study to examine how widespread violence against women is and the reasons behind it.

Of those who admitted rape, just under half said they had done so more than once.

The prevalence of rape varied between countries.

In Papua New Guinea, more than six out of 10 men surveyed admitted forcing a woman to have sex.

In Cambodia, China and Indonesia it ranged from one in five to almost half of all men surveyed.

Part of the research has been published in The Lancet Global Health.

The authors said that the findings do not represent the whole Asia and Pacific region – but the survey respondents do provide a good demographic match for the countries studied.

Nearly three quarters of those who committed rape said they did so for reasons of “sexual entitlement”.

Report author Dr Emma Fulu said: “They believed they had the right to have sex with the woman regardless of consent.

“The second most common motivation reported was to rape as a form of entertainment, so for fun or because they were bored.”

That was followed by using rape as a form of punishment or because the man was angry.

Men who had themselves suffered violence as children, especially childhood sexual abuse were more likely to have committed rape.

“More than half of non-partner rape perpetrators first did so as adolescents, which affirms that young people are a crucial target population for prevention of rape.

“The challenge now is to turn evidence into action, to create a safer future for the next generation of women and girls.”

Professor Rachel Jewkes, who led the research in Papua New Guinea, said the area they surveyed – Bougainville – had a particularly turbulent history, with an extraordinarily destructive civil conflict extending from the late 1980s to beyond 2005.

“It’s an area where the conflict hasn’t been absolutely resolved,” she said.

“When we looked at mental health we saw particularly high prevalence of post traumatic stress disorder including uncontrollable aggression, the disruption of normal social relations and relations in the family.”