How the Syria debate in Congress could play out this week 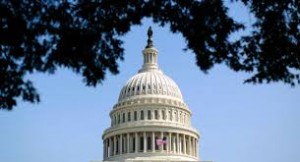 Congress returns to Washington on Monday after a monthlong summer break to jump right into debate and votes on a resolution giving President Barack Obama the authorization to strike Syria.

How this all will unfold over the coming week is far from certain, but here’s how things could play out:

• The House and Senate are in session at 2 p.m. Senate Majority Leader Harry Reid is expected to take the first procedural steps to overcome an anticipated filibuster over whether to officially take up the Syria resolution. Republican Sen. Rand Paul of Kentucky, who filibustered John Brennan’s confirmation as CIA director earlier this year to protest Obama’s drone policy, told Fox News on Sundaythat he was weighing his options on how to stall the resolution.

• Obama will give a preview of his address to the nation when he does a round of interviews with major TV and cable outlets. CNN’s Wolf Blitzer will report on his interview with the president on The Situation Room at 5 p.m. ET.

• Rice will also brief members of the Congressional Black Caucus.

• Debate expected in the Senate.

• Obama goes to Capitol Hill to meet with Senate Democrats on Syria.

• Obama takes his case for a strike on Syria to the American people when he addresses the nation at 9 p.m. ET.

• Kerry, Hagel and other administration officials will brief all members of the Senate.

• What follows could be dictated by complicated parliamentary rules, the legislative strategy of supporters and opponents and other unforeseen variables that could influence the timeline of the debate.

It’s not clear how long the debate could last, but at some point Reid would move to end it if he thinks he has the necessary 60 votes. That could be the most significant vote of the week, because if it passes, it would send a strong signal that the resolution would ultimately succeed because final passage requires only a 51-vote simple majority.

And in the House?

• Republican leaders who control the House have said they will act after the Senate but have been vague on a schedule. It’s unclear whether the House would vote on the language in the Senate resolution or take up its own version.

Majority Leader Eric Cantor signaled in a memo to rank-and-file Republicans on Friday that debate could slip beyond next week.

“Members should expect a robust debate and vote on an authorization of use of military force pertaining to Syria in the next two weeks,” he wrote.

But House GOP leaders are leaving open the possibility the House won’t bring up the resolution if it fails in the Senate.
House Speaker John Boehner’s spokesman signaled that the burden for getting enough votes in the House is on Obama.

“Only a president can convince the public that military action is required. We only hope this isn’t coming too late to make the difference,” Boehner spokesman Brendan Buck said in a statement.