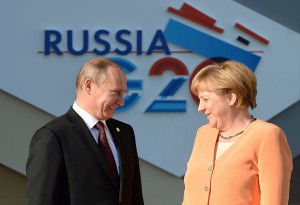 “The signal given by a united European position in the face of this abominable conflict is of invaluable importance,” her spokesman Steffen Seibert said in a statement.

EU foreign ministers meeting in the Lithuanian capital Vilnius on Saturday urged “a clear and strong response” to the attack, saying there was “strong evidence that the Syrian regime is responsible” but stopping short of endorsing a strike on the regime.

Speaking after the bloc’s 28 ministers held talks with U.S. Secretary of State John Kerry, EU Foreign Policy Chief Catherine Ashton read out a statement saying the ministers “were unanimous in condemning in the strongest terms this horrific attack.”

Minutes before Merkel’s comments, German Foreign Minister Guido Westerwelle announced that Germany had signed on to a separate statement from a G20 summit in Saint Petersburg this week that also calls for a “strong response” to the Syrian attack.

Germany became the fifth EU member to sign the document, which was penned by 11 countries at the summit – including the United States, Britain, France, Italy and Spain.

Merkel said the “Vilnius success shows that the German position” at the G20 summit pushing for a common EU stand “was right.”

Merkel had insisted during a parliament debate in Berlin on Tuesday that “Germany will not take part in military action” in Syria but will also do “everything possible… for a united response by the international community” to the Syrian crisis.

Europe has been sharply divided over how to respond to U.S. calls for military action against Syria after the attack, which Washington, Paris and London claim was carried out by the regime of President Bashar al-Assad.

The EU statement, agreed after two days of informal talks, stressed that there could be no end to the long and bloody Syrian war without a political solution.

It also urged the U.N. Security Council “to fulfill its responsibilities,” a clear reference to repeated refusals by Russia and China to sanction Assad.

France is the sole EU nation currently willing to take part in a U.S.-led intervention, with most of the bloc’s governments reluctant to offer even political backing for military action without at best a U.N. mandate, or at least until the release of a much-awaited U.N. probe on the attack.