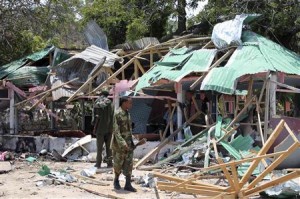 Somalia- Al Shabaab insurgents deployed a car bomb and a suicide bomber to attack a packed restaurant in the Somali capital Mogadishu on Saturday, killing at least 15 people and wounding 23, police and hospital officials said.

Mohamed Yusuf, spokesman for the Mogadishu authorities, said the car bomb went off first outside the popular Village Restaurant and a suicide bomber blew himself up inside immediately after.

“First a car bomb exploded at the entrance to the restaurant, and when people converged inside, a suicide bomber blew himself up,” he said.

It was the second attack in a year on the restaurant, which is owned by Somali businessman Ahmed Jama, who returned to his home country from London to set up a business against the advice of friends.

“We are behind today’s blasts,” al Shabaab’s spokesman for military operations, Sheikh Abdiasis Abu Musab, told Reuters. “Government officials, military forces, workers and their security always meet here. We had targeted it even before today and we shall continue targeting it.”

Senior police officer Ahmed Nur told Reuters that at least 15 people were killed. Hospital officials said 23 others were wounded in the attack.

A Reuters witness described mangled tables, chairs, blood and pieces of human flesh. Security forces cordoned off the area and told people to stay away for fear of more blasts.

Somalia has enjoyed relative calm after military offensives by African Union (AMISOM) peacekeepers and Ethiopian troops which have pushed al Shabaab from urban strongholds in central and southern Somalia.

Somali troops and AMISOM, comprising troops from Uganda, Kenya, Burundi and Djibouti, drove al Shabaab out of the capital in 2011.

But suicide attacks have raised concerns the militants remain a potent force and Ethiopia’s sudden withdrawal in March from Hudur – the capital of Bakool province near the Ethiopian border – enabled al Shabaab to retake the town.

The United Nations, the African Union Mission and Somalia’s president all condemned the attack.

“We strongly condemn the deliberate brutal blasts and we should collectively fight the terrorists. The second blast killed many civilian teenagers who wanted to help the casualties from the first blast,” President Hassan Sheikh Mohamud told a conference on reconciliation in Mogadishu.

Mohamud escaped unhurt on Tuesday from an ambush on his military-escorted motorcade that al Shabaab said they carried out using rocket-propelled grenades.

Mohamud’s elected government has been in charge for about a year and is striving to rebuild Somalia after two decades of civil war and lawlessness triggered by the overthrow of President Siad Barre in 1991.

“I am appalled by this act of savagery and condemn it in the strongest terms,” the U.N. Secretary General’s Special Representative for Somalia, Nicholas Kay, said in a statement.

“Such cruel and cowardly acts of terrorism serve to remind us that the people of Somalia desperately need peace.”

Photo: A Somali soldier stands in front of the destroyed Village Restaurant, the scene of a suicide car bombing, in Hamaerweyne district in Mogadishu September 7, 2013. A car bomb and suspected suicide bomber struck the restaurant in the Somali capital Mogadishu on Saturday, killing at least 15 people, police said. REUTERS-Feisal Omar