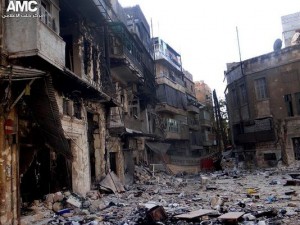 The Britain-based Syrian Observatory for Human Rights said the mortar and artillery fire on the Moldokhiya agricultural area south of Damascus killed 14 rebels. Two civilians, including a child, also died in the shelling, it added.

The group also reported heavy fighting between rebels and troops loyal to President Bashar Assad around the Christian village of Maaloula. The rebel advance into the area that began on Monday was reportedly spearheaded by al-Qaida-linked fighters, exacerbating fears among Syrians and religious minorities in particular that Islamic extremists are playing an increasingly important role in the rebellion.

Fighters from the Western-backed Free Syrian Army have also participated in battles around Maaloula, destroying two government checkpoints near the town earlier this week, according to a statement by the main opposition coalition on Friday.

The fighting comes as President Barack Obama’s administration presses ahead with efforts to win congressional backing and international support for military strikes against Syria over a chemical attack in August outside Damascus. The Obama administration says Assad’s forces fired rockets loaded with the nerve agent sarin on rebel-held areas near the capital before dawn Aug. 21, killing at least 1,429 people. Other estimates put the death toll in the attack at more than 500.

Kerry is in Lithuania to meet with European foreign ministers later Saturday.

European officials have been skeptical about whether any military action against Assad’s regime can be effective. They are expected to urge the U.S. to hold off on any strike in Syria until United Nations inspectors report on the alleged use of chemical weapons.

The U.N. inspectors’ report is expected later this month, although some European officials are asking the U.N. to speed up the probe or issue an interim report.

The prospect of a U.S.-led strike against Syria has raised concerns of potential retaliation from the Assad regime or its allies. On Friday, The State Department ordered nonessential U.S. diplomats to leave Lebanon over security concerns and urged private American citizens to depart as well.

The Shiite militant group Hezbollah, an Assad ally that has sent fighters into Syria, is based in Lebanon.

Syrian officials have been trying to capitalize on reluctance in Europe and the U.S., and both the government and state media accuse Obama of “supporting terrorism.”

“Any US aggression against Syria has no explanation other than (that it’s) supporting terrorism,” Syrian Deputy Foreign Minister Faisal Mekdad said in an interview with state-run Al-Ikhbariya TV broadcast late Friday. He challenged international community to present evidence that Syria had used sarin, and said military action against his country would be “dangerous and might affect America’s friends and the entire world.”