US Senators draft resolution to limit Syria action to 90 days 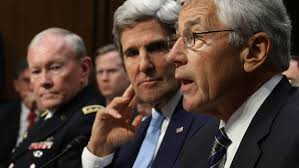 Leaders of the Senate Foreign Relations Committee said Tuesday they reached an agreement on a draft resolution to use military force in Syria, setting a 60-day deadline, with one 30-day extension possible for the intervention — while also barring the involvement of ground forces in the conflict.

“Together we have pursued a course of action that gives the President the authority he needs to deploy force in response to the Assad regime’s criminal use of chemical weapons against the Syrian people, while assuring that the authorization is narrow and focused, limited in time, and assures that the Armed Forces of the United States will not be deployed for combat operations in Syria,” Democratic Sen. Robert Menendez, chairman of the Senate Foreign Relations Committee, said in a statement.

The draft could be voted on by the panel on Wednesday. If approved, it would be sent to the full Senate for a vote once members return from recess on Sept. 9.

Two members of the House, Democrats Gerald Connolly and Chris van Hollen, offered their own version of a resolution — also limiting the engagement to 60 days and prohibiting U.S. “boots on the ground” in Syria.

Confronting skeptics of an attack on Syria, Secretary of State John Kerry said Tuesday that the world is watching and wants to know whether the United States will “rise to this moment and make a difference.”

“The president is not asking you to go to war,” Kerry said in response to a question asked by Sen. Rand Paul, R-Ky. “He’s simply saying we need to take an action that can degrade the capacity of a man who’s willing to kill his own people by breaking a nearly 100-year-old prohibition, and will we stand up and be counted to say we won’t do that.”

Paul suggested he would require anyresolution approving U.S. military involvement in Syria pass the Senate by a filibuster-proof majority.

The secretary said American intelligence services had gone over and over the evidence that the government of Syrian leader Bashar Assad used chemical weapons in an assault on rebel forces Aug. 21.

He said hair and blood samples from the scene had tested positive for signs of sarin gas. He described the case as beyond a reasonable doubt, and said that the United States must act rather than retreat into “armchair isolationism.”

“This is not the time to be spectators to slaughter,” he told the Senate Foreign Relations Committee. “Neither our country nor our conscience can afford the cost of silence.”

The secretary stressed that American allies, notably Israel, are watching because they know that they are “one stiff breeze away” from a chemical attack. And he said Iran, North Korea and the terror group Hezbollah are paying attention, too.

“They are all listening for our silence,” he said, adding that the Obama administration is not contemplating the possibility of losing a congressional vote on Syria because that scenario is too “dire.”

Kerry appeared with Defense Secretary Chuck Hagel and with Gen. Martin Dempsey, the chairman of the Joint Chiefs of Staff, as part of a full day’s press by the White House in support of a military strike against Syria.

Kerry said that Assad had used chemicals after repeated warnings from the president, Congress and U.S. allies. Hagel added: “The word of the United States must mean something. It is vital currency in foreign relations, and international and allied commitments.”

The Obama administration gained an important ally when House Speaker John Boehner of Ohio, the highest-ranking elected Republican in Washington, said he would support the president’s callfor military action.

Other Republicans, including Senate Republican leader Mitch McConnell of Kentucky, were conspicuously more reserved. McConnell said Congress needs to hear more about what can be accomplished in Syria.

Still, the top senators on the Foreign Relations Committee neared agreement on a resolution authorizing the use of force in Syria, the committee’s top Republican, Sen. Bob Corker, told reporters.

President Barack Obama and Vice President Joe Biden huddled with the heads of key congressional committees in the White House Cabinet Room. Boehner, Corker, House Democratic leader Nancy Pelosi and McConnell were among those present at the meeting.

In brief remarks to reporters, Obama stressed that American action would be limited and meant to “degrade” the capability of Assad, who is suspected of using chemical weapons against his own people last month.

“This is not Iraq, and this is not Afghanistan,” Obama said.

Among the day’s other major developments in the Syria crisis:

— Israel test-fired a missileover the Mediterranean Sea, adding to tension in the region. U.S. military officials told NBC News that no American ships took part in the test, and called the test fairly routine.

— The United Nations said that more than 2 million Syrians have poured into neighboring countries, about 5,000 per day. A U.N. commissioner said Syria had become “the great tragedy of this century.”

— A spokesman for the Syrian opposition said that a Syrian forensic medicine expert has evidence of Assad’s involvement in a chemical weapons attack in March — and has defected to Turkey.

— Pope Francis said from his official Twitter account: “With utmost firmness I condemn the use of chemical weapons.”

At the Senate hearing, Kerry said Syria was not a matter of “President Obama’s red line,” a reference to a phrase the president used last year to describe Syria’s hypothetical use of chemical weapons. Obama’s political opponents have seized on the remark as an example of inaction.

Kerry encouraged senators to view the crisis through a long lens — the civilized world’s rejection of chemical weapons since World War I.

“This debate is about the world’s red line, about humanity’s red line, a line that anyone with a conscience should draw,” he said.

Several anti-war protesters interrupted the Senate hearing, prompting Kerry to say the day’s events reminded him of his 1971 testimony about the war in Vietnam.

“Nobody wants this war! Cruise missiles, launching cruise missiles means another war — the American people do not want this!” said Medea Benjamin, one of the protesters.

“You know, the first time that I testified before this committee, when I was 27 years old, I had feelings very similar to that protester, and I would just say that is exactly why it is so important that we are here having this debate,” Kerry said. “And I think we all can respect those who have a different point of view, and we do.”

The Senate hearing followed a long weekend during which the administration backed off what appeared to be an imminent strike and began making its case to Congress and the public.

The administration argues that Assad must be punished for firing chemical weapons into a suburb of the capital, killing more than 1,400 people, including more than 400 children.

Obama said Tuesday that he is confident that Congress will authorize military action against Syria. He said he would be willing to rewrite his draft resolution to Congress, “so long as we are accomplishing what needs to be accomplished which is to degrade Assad.”

The timing of a vote in Congress could be tricky. The nation marks the 12th anniversary of the Sept. 11 attacks next week, and the U.N. opens its General Assembly on Sept. 17.

On Monday, Obama met with two key Republican senators, John McCain of Arizona and Lindsey Graham of South Carolina. McCain, after the meeting, called on Congress to pass a resolutionapproving force against Syria.

Both Republicans said the goal of military action should be to “degrade” the capabilities of the Assad regime and “upgrade” those of the Syrian opposition, which has fought the Assad government for more than two years into a civil war.

McCain and Graham also criticized Obama for failing to make a clear case for intervention.

Also Monday, Kerry, Hagel and National Security Adviser Susan Rice were among the administration officials who spoke to 127 House Democrats by conference call to argue for a Syria strike.

Sources told NBC News that Pelosi came to the administration’s defense, telling colleagues that preventing the spread of weapons of mass destruction was an important piece of U.S. national security policy.

Kerry told the call that Congress faces a “Munich moment,” a reference to the 1938 agreement that ceded part of Czechoslovakia to Nazi Germany, and that was judged by history to be an appeasement of Adolf Hitler.

Kerry will go before the House Foreign Affairs Committee on Wednesday.

The president planned to fly overnight Tuesday to Sweden to meet with Scandinavian leaders there. He arrives Thursday in Russia for a meeting of the Group of 20 world economic powers.

Obama, preparing to argue his case before Congress and the American public, said Saturday: “We should have this debate, because the issues are too big for business as usual.”