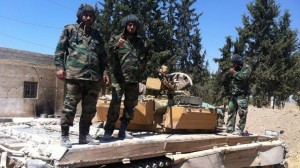 BEIRUT, Lebanon- As the Obama administration tries to prod Congress into backing armed action against Syria, the regime in Damascus is hiding military hardware and shifting troops out of bases into civilian areas.

Politically, President Bashar Assad has gone on the offensive, warning in a rare interview with Western media that any military action against Syria could spark a regional war.

If the U.S. undertakes missile strikes, Assad’s reaction could have a major effect on the trajectory of Syria’s civil war. Neighboring countries could get dragged into a wider conflict, or it could be back to business as usual for a crisis that has claimed the lives of more than 100,000 people over 2 1/2 years.

The main Western-backed opposition group says that during the buildup last week to what seemed like an imminent U.S. attack, the army moved troops as well as rocket launchers, artillery and other heavy weapons into residential neighborhoods in cities nationwide. Three Damascus residents, speaking on condition of anonymity for fear of reprisals, confirmed such movements.

One man said two members of the elite Republican Guards broke into an empty house he owns and showed him an official document stating they were authorized to do so because Syria is at war. A woman in another area said soldiers moved into a school next to her house.

A U.S. official confirmed there are indications that the Syrian regime is taking steps to move some of its military equipment and bolster protection for defense facilities.

The official, who was not authorized to discuss intelligence matters and spoke on condition of anonymity, said that at this point, the U.S. has the information it needs to maintain a good handle on what the regime is doing to prepare.

The trend inside Syria is likely to continue in the coming days now that the regime has won a reprieve with President Barack Obama’s decision to seek congressional approval for military action.

“The Syrian regime knows there are 30-40 potential targets for U.S. airstrikes, and they have had ample time to prepare,” said Hisham Jaber, a retired Lebanese army general and director of the Middle East Center for Studies and Political Research in Beirut. “Half of them, if not more, have been evacuated, moved or camouflaged. This is the natural thing to do.”

Obama said last week that he believes the U.S. should strike Syria for what the administration says was a deadly chemical weapons attack by Assad’s forces on rebel-held suburbs of Damascus. The administration has stressed, however, that any operation would be limited and not aimed at tipping the balance of power in Syria’s civil war.

In an interview published Monday with the French newspaper Le Figaro, Assad refused to say how Syria would respond to Western strikes, but warned that “the risk of a regional war exists.”

The regime has a range of options if the U.S. does bomb. It could retaliate with rockets against U.S. allies in the region. It could unleash allies like Hezbollah against Western targets abroad. Or it could do nothing — and score propaganda points by portraying itself as victim of U.S. aggression.

The regime’s choice, analysts say, will probably depend on the magnitude of the American military action: The bigger and more sustained the strikes, the more likely the government in Damascus will feel compelled to respond.

If Washington follows through with calibrated strikes, analysts say, Assad may reach for a political card, not a military one.

“His first option is propaganda value,” said Salman Shaikh, director of the Brookings Doha Center. Assad could try to foster the notion “that the West is again attacking a Middle Eastern state, an Arab state, without the right international legitimacy. And he can bolster that dynamic, that narrative, by showing that it’s had a cost on innocent civilians.”

One way to achieve that would be to show the world images of civilians purportedly killed by American strikes.

“If he’s able to score points from this, he will feel that he’s actually won without actually engaging in a military response,” Shaikh said.

Assad charted a similar course after Israeli airstrikes in May that targeted advanced weapons destined for Lebanon’s Shiite militant group Hezbollah. His regime portrayed the attacks as proof of the rebels’ collusion with Israel, denounced the strikes as a violation of Syrian sovereignty and dispatched an obscure militant group to threaten retaliation.

In terms of military responses, Assad could launch rockets at U.S. allies Turkey, Jordan or Israel. But that could touch off a prolonged military engagement with an outside power at a time when the regime is already in a bloody fight for its survival.

An attack against NATO-member Turkey could trigger a response from the entire military alliance, while Jordan hosts about a dozen U.S. F-16 jets, a Patriot missile battery and around 1,000 American troops.

As for Israel, the Assad regime could launch rockets at the Jewish state, or turn to Hezbollah to do so. The militant group, which fought Israel to a standstill in a 34-day war in 2006, is believed to have a well-stocked arsenal of missiles capable of hitting the country’s major cities.

But analysts say Syria is unlikely to pursue such a course unless the U.S. strikes pose an immediate threat to Assad’s grip on power.

Hezbollah would have a lot to lose. The group is already facing flak at home for fighting alongside Syrian government troops against the rebels. A full-on confrontation with Israel on behalf of Syria would probably be a tough sell to its Shiite constituents at home, let alone the broader Lebanese public.

“I can’t see a situation whereby they would accept an order from Assad to, say, attack Israel or attack some domestic enemies. I think that would be too damaging for their position,” said Chris Phillips, a Syria specialist at Queen Mary University in London.

Israeli defense officials also say the odds of retaliation by Syria or Hezbollah are very low. Still, Israel has deployed Iron Dome anti-missile batteries in the Tel Aviv area and toward its northern frontier with Syria.

Between these two extremes lies a middle path for Assad, which would involve an attack such as a car bombing carried out by a sympathetic militant group.

“Something to indicate to the outside world that it’s dangerous to mess with the Assad regime, that they have levers that can cause damage elsewhere, while also plausibly denying that they’ve had direct impact,” Phillips said.

As an example, Phillips pointed to a double car bombing earlier this year in Turkey that killed more than 50 people. Turkey blames Syria, while Syria denies any role.