Syria’s neighbors and the United Nations urged the world to find a political solution to the conflict in Syria that’s created more than 6 million refugees.

“These countries need unreserved massive support from the international community and that support is not yet there,” UN High Commissioner for Refugees Antonio Guterres told reporters at a press conference at the UN in Geneva today.

More than one-quarter of Syria’s 22 million people have been driven from their homes since the rebellion against President Bashar al-Assad started in 2011, according to the UN refugee agency. More than 2 million of those are seeking shelter in neighboring Iraq, Lebanon, Turkey and Jordan.

Political leaders should come together to stop a conflict that’s escalating with the use of chemical weapons, Guterres said after meeting with ministers from the four countries. 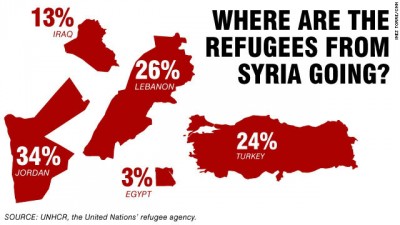 The use of chemical weapons is “a threat to the entire world,” Jordan’s Foreign Minister Nasser Judeh told reporters in Geneva.