USS Nimitz , other ships on way to support strike on Syria 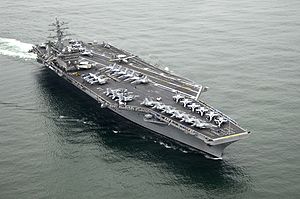 The nuclear-powered aircraft carrier USS Nimitz and other ships in its strike group are heading west toward the Red Sea to help support a limited U.S. strike on Syria, if needed, defense officials said on Sunday.

The Nimitz carrier strike group, which includes four destroyers and a cruiser, has no specific orders to move to the eastern Mediterranean at this point, but is moving west in the Arabian Sea so it can do so if asked. It was not immediately clear when the ships would enter the Red Sea, but they had not arrived by Sunday evening, said one official.

“It’s about leveraging the assets to have them in place should the capabilities of the carrier strike group and the presence be needed,” said the official.

President Barack Obama on Saturday delayed imminent cruise missile strikes by five destroyers off the coast of Syria, and sought approval from Congress, a move that effectively put any strike on hold for at least nine days.

The delay gives military planners more time to reassess which ships and other weapons will be kept in the region – and which may be swapped out – before the U.S. military launches what defense officials say is still intended to be a limited and narrowly targeted attack on Syria.

The U.S. Navy doubled its presence in the eastern Mediterranean over the past week, effectively adding two destroyers to the three that generally patrol the region. The five destroyers are carrying a combined load of about 200 Tomahawk missiles, officials say.

The Nimitz carrier group had been in the Indian Ocean, supporting U.S. operations in Afghanistan, but was due to sail east around Asia to return to its home port in Everett, Washington, after being relieved in recent days by another aircraft carrier, the USS Harry S. Truman.

Given the situation in Syria, U.S. military officials decided to reroute the Nimitz and send it west toward the Red Sea, and possibly the Mediterranean, officials said.

The Navy has also sent the USS San Antonio, an amphibious ship with 300 Marines and extensive communications equipment on board, to join the five destroyers, diverting it from a previously scheduled mission that would have taken it farther west.

A second official said the San Antonio had been asked to serve as an afloat forward staging base, which could provide a temporary base for special operations forces, if they were needed. It could also assist with evacuations.

A spokesman for the ship declined comment, referring questions to the Navy. Lieutenant Adam Cole, spokesman for the Navy’s European headquarters, declined to discuss any specific plans for the San Antonio or future ship movements.

Decisions about the location of other ships will be made in coming days, based on military needs, maintenance issues and staffing requirements, officials said, noting that the delay in a strike on Syria had sent planners back to the drawing board.

The USS Kearsarge, a large-deck amphibious ship that is part of a readiness group with the San Antonio, is also on the way toward the Red Sea after a port call in the United Arab Emirates, officials said. No further specific orders had been issued to the ship, they said.

The Kearsarge, which carries 6 AV-8B Harriers, 10-12 V-22 Ospreys and helicopters, played a key role in the 2011 strikes on Libya. Two Ospreys launched from the ship helped rescue a downed F-15 pilot during that operation.