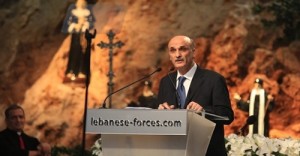 Lebanese Forces leader Samir Geagea said on Sunday that Hezbollah has killed the army-people-resistance formula as a result of its involvement in Syria and the Lebanese people buried it .

During a mass held in Maarab marking the anniversary of the Lebanese resistance’s martyrs, Geagea stressed that the Lebanese people will oppose the formation of any cabinet that does not ensure the country’s neutrality and that does not adopt the Baabda Declaration as the essence of its ministerial statement with regard to regional events.

“We will no longer accept any government -be it political, technocratic, neutral, political or non-political- that does not have the Baabda Declaration as the essence of its ministerial statement.” Geagea said

Geagea also criticized the current cabinet’s ministerial statement which allows for the government to continue upholding the status of Hezbollah’s arms despite its involvement in the Syrian war.

“What we need today is the formula of the unity of the people-the state -and [its] institutions,” the LF leader added.

Geagea stressed that the Lebanese presidency is being marginalized after the Baabda Declaration was torpedoed .

“Hezbollah’s involvement in repressing the Syrian people antagonized dozens of friendly countries and hundreds of millions of Arabs, Muslims, Christians and the international public opinion.”

The “Baabda Declaration,” is an agreement that was reached between the rival March 8 and March 14 leaders in 2012. It calls for “keeping Lebanon away from the policy of regional and international conflicts and sparing it the negative repercussions of regional tensions and crises.”

Hezbollah’s active military support for the Syrian regime is seen by observers as a contradiction to the Baabda Declaration and violates Lebanon’s disassociation policy and risks Lebanon’s stability.

171 Hezbollah fighters have reportedly been killed during the past few month while fighting alongside the forces loyal to Syrian president Bashar al Assad, according to Syrian Observatory for Human Rights SOHR.

Lebanese President Michel Suleiman said earlier in August that the army-people-resistance formula can no longer be used for the new cabinet’s policy statement due to Hezbollah’s involvement in the war in Syria, al-Liwaa newspaper reported last month

PM-designate Tammam Salam has been trying to form a cabinet based on giving an equal share to the opposing political blocks – March 14 , March 8 and the centrists, but the Hezbollah led March 8 alliance is insisting on having a bigger share in the cabinet to allow it to veto its decisions . Salam has been opposed to give any party a veto power ( usually referred to as a blocking third ) . He has recently been floating the idea of forming a neutral cabinet of technocrats, but Hezbollah has been opposed to this idea too and has been insisting that the new cabinet should adopt the army-people-resistance formula in its ministerial statement .This is why Lebanon is still without a government and Najib Mikati is still acting as the caretaker Prime Minister.