Russia Running Out of Cards on Syria 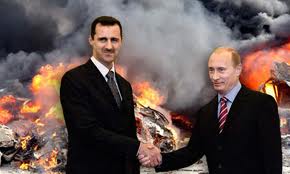 The Kremlin said Friday it is still trying to prevent a Western military strike against the regime of Syrian President Bashar al-Assad, but Moscow appears to be running out of cards to play to protect its longtime ally.

From the start, the Kremlin has ruled out direct military intervention, not wanting to risk a broader confrontation with the West. Moscow has supplied weapons and financial backing, but not enough to turn the tide in the fighting. Regular Russian vetoes of United Nations Security Council resolutions that would have raised the pressure on the Assad government have led the U.S. and its allies to seek sanction for possible military action elsewhere, sidelining Russia.

He and other observers see little chance of major Russian retaliation to a military strike on Syria beyond angry rhetoric and further stonewalling in the Security Council. Major new arms or financial assistance to Damascus would further poison relations with the West and risk greater escalation in Syria.

Diplomats and analysts said the Kremlin appears not to have shipped advanced S-300 air-defense systems to Syria, weapons that could help the Assad regime shoot down western or Israeli planes, potentially shifting the balance of power in the region. Such weapons would invite pre-emptive attack by Israel, potentially threatening Russian personnel on the ground.

“Everything Russia wanted to ship to Syria, it has,” said Ruslan Pukhov, director of CAST, a Moscow military-analysis center. “We can’t do anything more.”

Military officials said this week that the Russian Navy is dispatching several ships to the Eastern Mediterranean. But analysts said the small Russian force, dwarfed by the U.S. naval presence there, is mainly symbolic. Militarily, the most it is likely to do is provide security in the event Russia evacuates the small resupply base it maintains in the Syrian port of Tartous, analysts said.

Any major moves to pull Russian personnel or equipment out of Syria could also have the unintended effect of undermining the Assad regime by suggesting that Moscow was losing confidence that it could hold on.

Western diplomats who in recent days have been quietly sounding out their Russian counterparts on Moscow’s likely response to a strike say the initial indications are that Russia’s actual reaction—thought probably not its rhetoric—is likely to be measured.

At a Kremlin briefing Friday, Yuri Ushakov, top foreign-policy aide to President Vladimir Putin, wouldn’t be drawn into a discussion of possible Russian reactions to a western strike. “For the moment, Russia is working actively to avoid any kind of scenario involving force,” he said. Mr. Putin made that case Thursday in a phone call with German Chancellor Angela Merkel.

He said Thursday’s vote the U.K. Parliament against military action was a sign of growing skepticism in the West with calls to punish the Assad regime for its alleged use of chemical weapons against its own citizens on Aug. 21.

“It seems to me that people are starting to understand how dangerous these scenarios are, especially without sanction,” he said, referring to proposals to use military force without U.N. backing.

Russian officials argue that they aren’t seeking to preserve the Assad regime but oppose the principle of intervention without U.N. sanction.

“We don’t want the situation to become one where a single state or group of states charges, convicts and imposes their own sentence,” Mr. Ushakov said. “This kind of action bypassing the U.N. Security Council, if it takes place, would do enormous harm to the world system.”

He also reiterated that the Kremlin remains unconvinced by U.S. allegations that the Assad regime was behind the use of chemical weapons on Aug. 21. “The Americans haven’t given us their intelligence data. We don’t believe it,” he said.

Moscow fears that weakening the Assad regime will strengthen Islamist extremists in the region, spreading instability and terrorism outside Syria’s borders. Russian officials argue that U.S. claims of humanitarian motives are just a cover for efforts to remove an unfriendly regime in Damascus.

Vladimir Chizhov, Russia’s ambassador to the European Union, said Friday in an interview with the Interfax news agency that the parallels to U.S. intervention in Yugoslavia and Iraq—both of which Russia vehemently opposed as aimed at regime change—were unmistakable. “It’s hard to avoid the feeling that history is repeating itself again,” he said.

Tensions over Syria are likely to figure high in next week’s summit of Group of 20 leaders in St. Petersburg. Mr. Ushakov said the issue isn’t on the official agenda but is likely to come up in discussions.