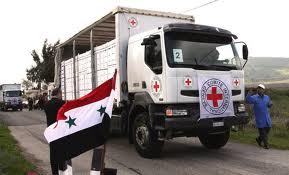 The International Committee of the Red Cross issued a report on Syria in which it said the suffering of civilians has now reached unprecedented levels and there appears to be no end in sight. There are acute shortages of vital medical supplies, food and water in a number of areas that have been sealed off for months and that an escalation of the crisis in the wake of the apparent use of chemical weapons will worsen the situation in the country

Here is the press release that was issued by the ICRC

Geneva/Damascus (ICRC) – The International Committee of the Red Cross (ICRC) is appalled by recent developments in Syria, including last week’s reported use of chemical weapons and the ensuing escalation of events.

“The suffering of civilians in Syria has now reached unprecedented levels, and there appears to be no end in sight,” said Magne Barth, head of the ICRC’s delegation in the country. To date, more than 100,000 people have reportedly been killed, and hundreds more are dying on a daily basis or struggling through with their injuries. In addition, each and every day, hundreds of people are joining the millions of Syrians already displaced within the country or seeking refuge abroad. “Further escalation will likely trigger more displacement and add to humanitarian needs, which are already immense,” said Mr Barth.

“There are acute shortages of vital medical supplies, food and water in a number of areas that have been sealed off for months and to which the ICRC and the Syrian Arab Red Crescent have not been given access,” he said. “In large parts of Rural Damascus for example, people are dying because they lack medical supplies and because there are not enough medical personnel to attend to them. They also go hungry because aid can’t get through to them on a regular basis.”

“The ICRC and the Syrian Arab Red Crescent remain as committed as ever and are ready to respond to needs, wherever they are and whatever they may be, provided humanitarian work can take place and we are given unconditional access to all areas,” added Mr Barth.

Under international humanitarian law, the parties to the conflict must allow and facilitate rapid and unimpeded passage of humanitarian relief for civilians in need. They must also respect the right of all persons who are wounded or sick, whether fighters or civilians, to receive medical attention with the least possible delay. In addition, any use of chemical weapons by any party would constitute a serious violation of international humanitarian law. The ICRC calls on all parties to the conflict in Syria to respect the absolute prohibition on the use of chemical weapons.