Russia warns U.S. not to repeat in Syria past mistakes 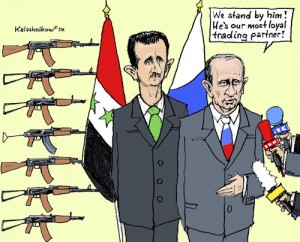 Russia warned the United States on Sunday against repeating past mistakes, saying that any unilateral military action in Syria would undermine efforts for peace and have a “devastating impact” on the security situation in the Middle East.

Referring to the United States’ military intervention in Iraq, the Russian Foreign Ministry said in a statement that any military action would affect joint U.S.-Russian efforts for an international peace conference on Syria.

“We once again decisively urge (the United States) not to repeat the mistakes of the past and not to allow actions that go against international law. Any unilateral military action bypassing the United Nations will … lead to further escalation (in Syria) and will affect the already explosive situation in the Middle East in the most devastating way,” the ministry said.