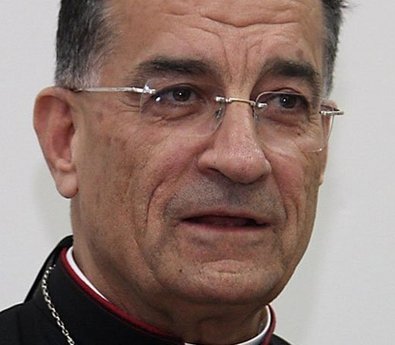 Maronite Patriarch Beshara al-Rai arrived at al-Taqwa Mosque in Tripoli to offer condolences over the victims of the twin bombings that rocked the city of Tripoli on Friday.

“We extend our condolences and say that we’re also feeling what you’re feeling because the disaster affected everyone.” He said and added:

“After ten days from the Ruweis bombing, the same hand of evil orchestrated the Tripoli bombings and I tell you in the name of the Maronite church that the tragedy in Dahieh and the tragedy in Tripoli are our tragedies because we are one body and one family.”
Rai called for dialogue and reconciliation:

“Aren’t the Dahieh and Tripoli martyrs enough reason to sit at the dialogue table and reconcile differences?”

Rai added:
“Together with you, I tell all the rival political parties in Lebanon that condemnation alone is not enough as the blood that was shed is urging the conscience of the rival parties to wake up.”

“All those who fell were killed as a result of the absence of harmony, frankness and dialogue. Had we been united and had we shouldered the responsibility of building the state, we wouldn’t have reached the disasters we’re witnessing today.”