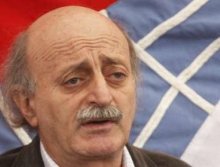 Jumblatt was planning to use the ceremony to respond to the threats against him by Hezbollah , but after the explosion that took place in the Dhahieh on Thursday and Hezbollah leader Sheikh Hassan Nasrallah’s speech on Friday, what he wanted to say became obsolete. .

Jumblatt was reportedly under pressure from the elders and clerics of the Druze community to respond to Hezbollah, after the party threatened the Druze by stating that the 2 largest Druze strongholds of Aley and Chouf are not larger than Qusair. In reference to the city that Hezbollah helped the Syrian regime regain control of from the Syrian rebels.

In May 2008 Hezbollah tried but failed to occupy the Druze strongholds after it occupied the western part of Beirut.

While Jumblatt has been voicing his support to the Syrian rebels , Hezbollah has been sending its fighters to Syria to fight alongside the forces loyal to president Bashar al Assad against the rebels who are seeking to overthrow the 40 year old dictatorship.

Jumblatt decided instead to broadcast his speech during a press conference that will be held by former General Secretary of the party Sharif Fayyad at the party’s headquarters in Aley on Sunday.