Hariri: What will Hezbollah's do after Assad falls? 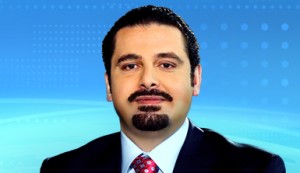 “Nasrallah’s speech did not contribute to defusing tension in Lebanon on the contrary it served as an escalation of Lebanon’s involvement in the Syrian fire.” Hariri said adding: “Sedition is the essence of terrorism, and the most dangerous kind.”

Once again, Nasrallah’s speech failed to break the cycle of escalation,” Hariri stressed.

Hariri reiterated his condemnation of the car bombing in the Ruwaiss neighborhood of Hezbollah’s Dhahieh stronghold, south of the capital Beirut , but said :

“What happened in Ruwaiss is an ugly crime, but Hezbollah’s war in Syria is a crime as well,” Hariri posted on his twitter account.

The explosion that rocked the Ruwaiss area on Thursday killed over 27 people and wounded hundreds.

In his speech on Friday, that marked the anniversary of the end of the 2006 war with Israel the Hezbollah chief called for restraint but at the same time accused takfiri groups ( Sunni Muslim extremists ) of standing behind the Ruwaiss blast and the Bir Al Abed explosion that hit the Hezbollah stronghold last Julythe resulted in the wounding of dozens of civilians.

Nasrallah said he was ready to personally fight in Syria if the battle with takfiris required us to do so.

“I listened to the speech of the Hezbollah secretary general. It was rather balanced at first but catastrophic toward the end,” Hariri said.

“How can a responsible man contradict himself so drastically ; calling for self-restraint and announcing his readiness to personally go to Syria in the same speech ?” Hariri asked.

Hariri said that Hezbollah was defining terrorism based on its own interests . “It is good the Secretary General of Hezbollah is enthusiastic over combating terrorism, Hariri said but we still don’t understand, (referring to the deadly 2007 battles between the Lebanese Army and the Islamist Fatah al-Islam group in the Palestinian refugee camp of Nahr al-Bared of north Lebanon) why he drew a red line in Nahr al-Bared. Wasn’t it takfiri weapons fighting the army then?.”

Fatah al-Islam is a radical extremist Sunni Islamist group that draws inspiration from al-Qaeda. During its 2007 war with the Lebanese army it was led by Shaker al-Abssi who was a former officer in the Syrian army .Fatah al-Islam has close ties to the Syrian regime and much of its leadership is made up of Syrian officers, according to Al Hayat newspaper

“Terrorism is terrorism , regardless of the faces it takes, but Hezbollah explains it according to its own interests,” Hariri stressed.

Takfiris in both Sunni and Shiite sects consider people who do not share their religious views as infidels.

“Hezbollah’s logic reminds me of American logic for invading Iraq under the pretext of Weapons of Mass Destruction (WMD),” Hariri tweeted, referring to the U.S.-led invasion of Iraq in 2003.

“The same will happen in Syria and the takfiris will prove to be a tiny minority which will have no place in Syria after Bashar’s fall,” he said.

“Takfiris have no place in Syria after the fall of Bashar. But what will Hezbollah do after Bashar falls?,” Hariri asked.

“Logically it will withdraw from Syria but what will it do in Lebanon? America withdrew from Iraq to America where Iraq is not its neighbor.”

“ Nasrallah is laying the foundations for a tense neighborhood with the new Syria,” Hariri said.

The former prime minister added that the Lebanese state could protect the country.

“Whenever there is a common collective decision we can really protect Lebanon. The State is the common ground for all,” he said.

“The army represents the entire people, from all categories, sects and regions. The people resist through their army. We no longer need the resistance that considers itself above the state ”

The Iranian backed Hezbollah militant group has been widely criticized by Lebanese and Arab leaders for supporting the Syrian regime of President Bashar al-Assad in its sectarian war against the mostly Sunni Syrian rebels who are trying to overthrow the 40 year old dictatorship. Thousands of Hezbollah fighters are fighting in Syria alongside the forces loyal to Assad and hundreds of them have been brought in coffins for burial in Lebanon.