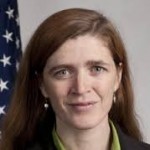 WASHINGTON — Samantha Power, a Pulitzer Prize-winning author and foreign policy advisor to President Obama, won confirmation Thursday as the new U.S. ambassador to the United Nations with a vote that completes the administration’s foreign policy team for the second term.

The outspoken former journalist and human rights advocate was confirmed by a vote of 87 to 10, far more support than critics had predicted after her high-profile career as an author and activist.

“As a longtime champion of human rights and dignity, she will be a fierce advocate for universal rights, fundamental freedoms and U.S. national interests,” Obama said in a statement. “I’m grateful that Samantha will continue to be a vital member of my national security team, and I know that under her leadership our U.N. mission in New York will continue to represent American diplomacy at its best.”

Power, 42, covered the war in Bosnia in the 1990s as a writer for several newspapers and magazines. After she returned, Power earned a degree at Harvard Law School and wrote about the public policy of human rights.

She is best-known for her 2002 book, “A Problem from Hell: America and the Age of Genocide,” the work that caught Obama’s attention as a new member of the U.S. Senate.

The book pointed out the successes and failures of the United States in responding to mass atrocities, ideas that Power echoed in many public speeches and interviews after its publication.

Critics took one of her comments in one of those interviews to mean that she believed U.S. officials would have to alienate Jewish American supporters of Israel to achieve Middle East peace. Even some supporters expected a swell of controversy around her nomination.

But Power worked for weeks to reassure senators she would not apologize for the United States and would fight any efforts to attack the legitimacy of Israel in the U.N. or anywhere else. Prominent Jewish leaders spoke up in her defense, citing her work as the White House liaison to the U.N. during Obama’s first term.

Power worked with Susan Rice, the former ambassador to the U.N., to promote sanctions against Iran and to oppose the Palestinian statehood initiative, according to administration officials familiar with her behind-the-scenes work.

By the end of her tour of Capitol Hill this summer, Power had talked to dozens of senators.

In explaining his vote against her, Sen. Marco Rubio (R-Fla.) complained Thursday that Power would not discuss her critiques of U.S. policy.

“I asked her about her past claim that the United States had committed ‘crimes’ around the world that it needed to reckon with. I raised this question not to embarrass her, but rather to give her the opportunity to either point out examples of these crimes or to clarify what she meant by those comments,” Rubio said on the Senate floor.

“But instead, she kept avoiding directly addressing my question,” he said. “She kept saying that ‘America was the greatest country in the world’ and that she would not ‘apologize for America.'”

But most Republican senators came to support Power. Among those speaking on her behalf were Sens. John McCain (R-Ariz.) and Lindsey Graham (R-S.C.), prominent leaders on foreign policy issues.

Sen. Saxby Chambliss (R-Ga.), one of Power’s most vocal supporters, praised her Thursday as an accomplished spokeswoman.

“A strong voice in the United Nations is imperative,” he said. “Samantha Power is an individual who possesses the type of character, the type of strong background … the intellect and the right kind of ability to communicate to represent us today in this complex world.”