Obama finds he has limited leverage In Mideast 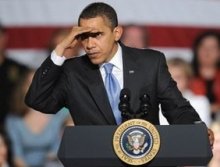 The Middle East has a tendency to eat up American presidencies, and suddenly that is a real danger facing President Barack Obama.

The region is much closer to a broad conflagration than most Americans realize, with Sunnis now facing off against Shiites, and secularists against Islamists across a wide swath of lands. The dream of fostering a new wave of democratic, multiethnic governments—embraced by two successive American administrations—may be withering before our eyes.

As a result, Mr. Obama is coming face-to-face with two hard questions: Does the U.S., with a shrunken checkbook and a weary military, have the power to steer events? And does the U.S., tired after a decade of war in Iraq and happy to be growing less dependent on Middle East oil, even care enough to try?The problems start with the bloody turmoil in the streets of Egypt, the cornerstone of American influence in the region for 35 years. There, a new military strongman seems more intent on crushing the Muslim Brotherhood than heeding American counsel to find a way to include the Islamists in a new government.

Mr. Obama is coming face-to-face with two hard questions: Does the U.S., with a shrunken checkbook and a weary military, have the power to steer events? And does the U.S., tired after a decade of war in Iraq and happy to be growing less dependent on Middle East oil, even care enough to try?

Meantime, Syria has become a proxy war for the entire region, pitting Shiites against Sunnis and drawing in combatants from all over. The nasty Alawite/Shiite axis of Syrian President Bashar al-Assad, Iran and Hezbollah has fought back to even with Sunni opposition forces, armed by Persian Gulf states and, soon, the U.S.

This now is essentially a sectarian war, and it’s starting to spread next door to Lebanon. Sunnis there resent the fact that Hezbollah’s Shiite fighters have been using Lebanon as a springboard to enter the fight on behalf of Mr. Assad. Car bombs and street fights between Sunni and Shiite groups are popping up; Lebanon is in danger of sliding back into its familiar rut of sectarian war.

Nearby, Jordan is becoming home to a giant, destabilizing refugee population of Syrians fleeing the fighting in their homeland. An estimated 650,000 refugees have entered Jordan; one refugee camp now is Jordan’s fourth-largest city. It is an economic and demographic crisis of the first order for Jordan’s king, one of America’s most reasonable and reliable allies.

Oh, and Libya, home to a vast stockpile of weapons that seem to be finding their way around the region, is drifting into lawlessness; a thousand inmates were sprung in a giant jail break over the weekend.

In the middle of all this sits Israel. It now is surrounded by trouble and the march of Islamist forces in every direction—in Egypt to the West, Jordan to the east, Syria to the northeast and Lebanon to the north. It’s no wonder that Israel agreed, after extensive prodding from Secretary of State John Kerry, to open new peace talks with the Palestinians in Washington this week. Amid this mess, it needs to buy a little stability on the home front if it can.

The impulse is to think the U.S. should do something—anything—to contain the risks.

But what? The U.S. once had great leverage over the Egyptian government because it provided the biggest chunk of aid. No longer. Saudi Arabia now writes much bigger checks, and it is urging the military leader there, Gen. Abdel Fattah Al Sisi, to hang tough against the Muslim Brotherhood. Each of the rival sides in Cairo’s streets seems to think Washington is supporting the other, limiting American influence with both.

The U.S. military once might have waded into the mess in Syria, but the president is wary and the Pentagon tends to view engagement in Syria right now as a losing proposition. More broadly, the notion that Mr. Obama’s relative popularity in, and overtures of friendship toward, the Islamic world could temper behaviors has faded in a period when hard power is what seems to matter.

The counter temptation is for the U.S. to simply step away, tending to the economy at home and pivoting toward Asia abroad. The problem is that history teaches that the Middle East doesn’t like being ignored. Through soaring energy prices, or the scourge of terrorism, or some other calamity, it has a habit of insinuating itself onto the American agenda.

That leaves the U.S. the unsatisfying option of working with allies on a series of half-steps to move the region back from the brink so transformation can start anew: With the Saudis to convince Gen. Sisi in Egypt to contain his security forces; with the Europeans to help Jordan to contain the refugee crisis; with Arab allies to exert enough pressure to expel Syrian President Assad before Syria fractures permanently.

Not a satisfying list, but perhaps the only one available.