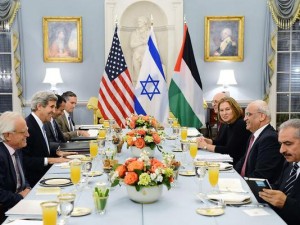 Israeli and Palestinian negotiators agreed Tuesday to continue to meet over the next several months on peace talks, though acrimony already is swirling about them.

The two sides ended discussions after agreeing to meet in two weeks to resume talks over the next nine months, Secretary of State John Kerry said.
Kerry said the two sides are committed to “sustained, continuous and substantive negotiations on the core issues” that divided them.

He said the next round of negotiations would take place in either Israel or the Palestinian territories. The goal of the talks is “ending the conflict. … And ending all claims,” he said.

Kerry had earlier said the leaders pledged to keep the substance and terms of the talks secret. But Monday, Palestinian President Mahmoud Abbas told Egyptian journalists that any deal must include the removal of Israelis from all territory seized in in war against Arab armies in 1967.

Israel has rejected such demands in the past given that some of that land in the so-called West Bank is where tens of thousands of Jews have lived for decades in cities and towns known as Israeli settlements.

“In a final resolution, we would not see the presence of a single Israeli — civilian or soldier — on our lands,” Abbas said during a visit with Adly Mansour, Egypt’s interim president, according to the Jerusalem Post.

He said he would accept an international, multinational presence similar to United Nations peacekeeper operations in the Sinai, Lebanon and Syria.

Abbas’ words were picked up by Israeli and Jewish media. New York-based The Jewish Press referred to his plan as “Judenrein,” the Nazi goal of cleansing the land of Jews in the West Bank, which the paper referred to by its Biblical names.

Israel, a country of 8 million, allows more than 1.6 million Arabs, many of whom call themselves Palestinians, to reside in Israel including in the capital of Jerusalem. Arab citizens have the same rights as Jews in Israel.

“As far as Abbas is concerned, there is no way the Jewish settlements of Judea and Samaria that happen to remain on the wrong side of the new border could apply for Palestinian citizenship,” the Jewish Press said.

Abbas said he considers settlements illegal and would not allow illegal residents to remain in a future Palestinian state. By talking about his goals, however, Abbas seemed to contradict the secrecy Kerry has said is necessary for talks to succeed.

When he announced July 19 that talks would resume, Kerry said, “The best way to give these negotiations a chance is to keep them private. ”

Abbas’ words do not contradict the secrecy Kerry has said is necessary for talks to succeed, said Jonathan Schanzer of the Foundation for Defense of Democracies.

“What is going on secretly is the give and take between (the negotiators themselves) but in the meantime both political leaders have distanced themselves to a certain extent from the process,” Schanzer said. “They’ve created a little distance on purpose, they crafted it this way, so the discussions can continue to take place.”

Abbas’ statement is similar to what Palestinian leaders have said for decades, and while an obvious reference to settlements, it also disregards “that there could be Jews who would prefer to remain in the West Bank after an agreement because of their Biblical ties to the land,” Schanzer said. “The idea there would be an expulsion is troubling and even more troubling when you consider the Israelis have a 20% minority Arab Israelis within Israel.”

Abbas signaling that “there won’t be a quid pro quo here” could threaten the eventual outcome of the talks, Schanzer said.

“At the end of the process, Mahmoud Abbas has to sign (any agreement), and if he holds on to these ideas we’re headed to a crisis,” he said.

The Palestinians’ chief negotiator, Saeb Erakat, said it’s time for the Palestinian people “to have a sovereign state of their own.”

Tzipi Livni, Israel’s chief negotiator, said she came to the talks “hopeful, but we cannot be naive.”

Achieving peace will not be easy, “but it’s not our intention to argue about the past, but to find a solution for the future,” Livni said. “A new opportunity has been created and we cannot afford to wait.”

Both negotiators met bnriefly with President Obama at the White House on Tuesday. Kerry said afterward that Israel will be taking a number of steps in the next few weeks — “changes on the ground” in the West Bank and Gaza to improve conditions for Palestinians. He did not elaborate.

“Israelis and Palestinians realize they have common interests and that’s why they’ve decided to take steps on the ground,” he said.

Tuesday’s talks were meant to set a framework for how future peace talks may proceed, the order in which the four or five “final status issues” — security, borders, Palestinian refugees, the status of Jerusalem and Israel’s status as a Jewish homeland — will be addressed and who will be in the room when the talks proceed.

“At the moment you don’t have an agreement to resume negotiations,” said Aaron David Miller, vice president of the Middle East Program at the Wilson Center and a former peace negotiator for Democratic and Republican administrations. Israeli and Palestinian teams came to Washington “to talk about how to resume negotiations.”

Rather than talk hash out the issues right away, they’ll be talking about whether they can agree on how to talk about them and about Palestinian demands for a construction freeze in settlements, and Palestinian pursuits against Israel in the United Nations and International Criminal Court, Miller said.

“They’re going to be interested in is there a sustainable basis for negotiations,” Miller said.

Photo: US Secretary of State John Kerry, second from left, hosts a meal for Israeli Justice Minister Tzipi Livni, third from right, and Palestinian chief negotiator Saeb Erekat, second from right, at the State Department on July 29 in Washington, D.C.