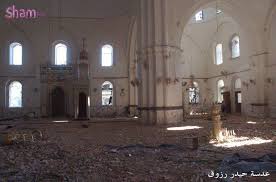 The Syrian Observatory for Human Rights said troops now controlled most of Khaldiyeh after a month-long assault and were battling insurgents on its outskirts.

The complete fall of Homs, dubbed by rebels “the capital of the revolution” against President Bashar al-Assad’s regime, would be a major coup for the government as the city straddles a key route linking Damascus to the Mediterranean coast.

State television said the army now controlled most of the Khaldiyeh district and broadcast footage of the destruction, including rubble-strewn streets and bodies it reported were of fighters.

An officer told the channel: “Only the northern sector is left (under rebel control), and that will be liberated within 24 hours.”

Some seven neighbourhoods in the Old City also remain in rebel hands, but troops appear determined to dislodge them as they did in the Homs province town of Qusayr, which they seized in June with help from Lebanon’s Hezbollah militiamen.

“The army and Hezbollah control a major part of Khaldiyeh after having gained ground (over the past 24 hours) and fighting is now concentrated on the northern and southern outskirts of the district,” Observatory chief Rami Abdel Rahman told AFP.

But the opposition National Coalition dismissed the army’s reported advances in Khaldiyeh as “fictitious victories” and accused the regime of having dumped “tonnes of bombs” on the area.

It also showed the interior of the famed Khaled bin Walid mosque which troops seized on Saturday.

The ancient place of worship noted for its Ottoman and Mameluk architectural style is where Khaled bin Walid, a prominent Arab warrior and companion of the Prophet Mohammed, is said to be buried.

The mosque was a focal point of the uprising now in its third year, and had been the launchpad for several anti-government demonstrations.

Bin Walid’s mausoleum has been destroyed in a rocket attack, according to the Observatory and militants.

Hezbollah, the strongest fighting force in Lebanon and whose military wing has been blacklisted by the European Union as a terrorist group, also helped the army retake Qusayr. That town is likewise strategic, standing on the border with Lebanon and linking Damascus to the coastal stronghold of Assad’s minority Alawite community.

Meanwhile, the opposition National Coalition condemned the reported “collective execution” by rebels of prisoners and said it had set up a commission of inquiry.

At least 150 Syrian regime forces died in fighting for control of Khan al-Assal in the northern Aleppo province, the Observatory said on Friday, adding that more than 50 of those killed were executed by rebels after the town fell last Monday.

The opposition said measures must be taken “against those whose implication in the crime is proven.”

Both sides have traded accusations that chemical weapons used in earlier fierce fighting at Khan al-Assal in March killed about 30 people.

A spokeswoman for UN chief Ban Ki-moon said late on Saturday he would review an accord struck with Syria on investigating the use of chemical weapons before any details are announced. Ban will meet in New York on Monday with one of the two envoys who struck the accord, she told AFP.

A joint statement on Friday said agreement had been reached “on the way forward” in the probe, following a visit to Damascus by Ake Sellstrom, head of the UN inspectors, and Angela Kane, the UN disarmament envoy.

The UN says the 28-month-old civil war in Syria has killed more than 100,000 people and created millions of refugees. On Saturday alone, at least 121 people died in violence across Syria, according to the Observatory.

AFP
Photo: Shows the destruction to the interior of the famed Khaled bin Walid mosque which Syrian troops seized on Saturday from the rebel forces who had been in control of the 13th century landmark for more than a year