Mugabe as hungry as ever to extend his 33-year rule 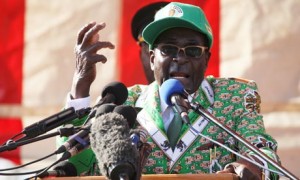 One was entering his eighth week in hospital, still in a critical condition. The other was on the campaign trail, his thirst for power unquenched, speaking for more than two hours despite blistering heat and whipping up supporters on Saturday with his signature line: “Zimbabwe, which we fought for, died for, must be never be a colony again.”

Nelson Mandela, 95, and 89-year-old Robert Mugabe are two giants of southern African politics with little in common: one sanctified, the other demonised. Both steered liberation movements into power, but whereas Mandela stepped down after five years Mugabe is as hungry as ever to extend his 33-year rule.

Mandela’s desperately frail physical condition has been thrown into sharp relief by Mugabe’s energy on the campaign trail in recent weeks. Africa’s oldest leader continues to defy the march of time, political gravity and opponents who long to see him face justice for alleged crimes against humanity. Running for election for the seventh time, he is widely tipped to beat his rival Morgan Tsvangirai in Wednesday’s poll – and to be ushered back into respectability by a pragmatic west.

Nelson Mandela, 95, and 89-year-old Robert Mugabe are two giants of southern African politics with little in common: one sanctified, the other demonised. Both steered liberation movements into power, but whereas Mandela stepped down after five years Mugabe is as hungry as ever to extend his 33-year rule.

Sporting a white Zanu-PF baseball cap, dark glasses and vividly patterned jacket over a pinstripe shirt, Mugabe leaned on a lectern and spoke without a break from noon on Saturday at a pre-election rally in Bulawayo, Zimbabwe’s second city. His wife Grace wore similar party regalia, but her dress bore two large portraits of the president. The crowd was a sea of Zanu-PF green and yellow, chanting, punching the air and waving placards that said: “Man of the people.” Mugabe belied his years and barely broke sweat as he framed the election as an epic struggle against imperialism, railing against Tsvangirai’s Movement for Democratic Change (MDC) as a British invention. Tony Blair was “a real liar, downright one,” he declared. “He said we must undermine the government of Zanu-PF and create an opposition for them.”

The 89-year-old went on to discuss sex, castigating US President Barack Obama and retired archbishop Desmond Tutu over their support for gay rights and retelling the story of Adam and Eve. “Man can marry man, woman can marry woman. Never, never, never. When bishops cannot interpret the Bible properly they should resign and leave it to those who can.”

Even donkeys knew the difference between the sexes, he added, although plants could be an exception. “You just know you’re a man through the physical talents that were given to you by the almighty.”

That the rally was televised live on Zimbabwe’s sole state TV channel is just one of the reasons why many believe Mugabe is poised for another victory. The media are firmly under his control, with ZBC replaying low-budget documentaries telling his life story. He can also count on state security institutions. Tsvangirai has cried foul over electoral roll irregularities – claiming some special early votes were found in a dustbin – and pockets of renewed violence and intimidation.

But the MDC has also been taken by surprise by the willpower and resilience of a man who confidently expects to become a nonagenarian in the state house and continue setting political records. Mugabe was “born as the Ottoman empire drew its final breath and when Calvin Coolidge was still in the White House,” the Associated Press noted recently. He has seen off Thatcher, Major, Blair and Brown as well as Reagan, Clinton and two Bushes.

He has continued to draw crowds with speeches championing black land ownership and the “indigenisation” of businesses. “I got here in early July and some of the MDC guys didn’t even think he could get up on a podium,” said Blessing-Miles Tendi, a political analyst who has attended seven of the rallies. “His age was a big thing and they didn’t think he could do it, but somehow he’s pulled it off. That surprised some of them.”

Tendi said a rally with members of an apostolic sect “astounded” him the most. “He humbled himself to be one of them. He tried to sit on the earth with them but they gave him a chair. The sun was baking and it was hard to get through for a 30-year-old man like me.”

Tendi estimated rally turnouts at 15-20,000 people, with free regalia and food suggesting Zanu-PF has more cash than last time. He added: “Mugabe is good at recreating himself depending on the national and international dynamics of the time. That’s why he’s lasted so long. He’s a survivor: the will is clearly there. He really sees this as the last stand: if he pulls it off, he’ll be in his mid-90s at the next election and he won’t be around for that. And the Zanu-PF guys are clear: if they beat Morgan Tsvangirai again, he’s finished.”

Mugabe’s allies insist victory is guaranteed and that he will go on and on. Simon Khaya Moyo, chairman of Zanu-PF, said: “He’s a very strong and very fit man. He has never failed to do what he’s doing. He’s a liberator, he’s a principled man, he’s a disciplined man and a revolutionary. He will serve as long as the people want him to serve.”

But despite the dice being loaded in Zanu-PF’s favour before a vote was cast, and some evidence that the MDC’s four years in a power-sharing government have disillusioned its base, Mugabe cannot take the result for granted. In 2008 Tsvangirai won more votes in the first round of the presidential poll, triggering a runoff which led to violence in which more than 200 people died, forcing Tsvangirai to withdraw.

A reinvigorated Tsvangirai is pulling in huge crowds again this time. An analysis of the 2008 voting trends by the Zimbabwe Independent suggests this year’s election could be heading for a dead heat, raising the prospect of another potentially bloody runoff.

If, however, Mugabe prevails in a mostly peaceful election, it could spell the end of his international pariah status. Analysts believe that the canny political operator has worn down the resistance of governments who now just wish the Zimbabwe issue would go away and are ready to lift sanctions for the sake of economic benefits. Most EU members are thought to be in favour of “moving on”, hoping that Mugabe will retire soon, with only Britain and the Netherlands holding out. In short, the west blinked first.

There are fears that Harare-based ambassadors’ warnings – that a peaceful election does not necessarily equate to a free and fair one – will be ignored by officials in Washington and elsewhere because it is not what they want to hear. Trevor Maisiri, a southern African senior analyst for International Crisis Group, said: “There is frustration in the diplomatic community in Zimbabwe that they are giving advice to their capitals that doesn’t go through. There is that disconnect.”

And if sanctions are lifted, a rebranded Mugabe could potentially once again travel to London, a city he always relished. “It’s very possible,” Maisiri added. “People would talk about it and then it would be accepted, but it would set a dangerous precedent for the region and beyond.”

Asked by the Observer about the prospect of the west overlooking his claims of vote-rigging for the sake of restoring relations, Tsvangirai replied: “For some years there has been a movement towards democratic precondition, but people get tired of the Zimbabwean issue, so what do they do? They resign and they say stability is better than democracy, and any form of accommodation of bringing our relations with Zimbabwe, by whatever means, we will do it. That’s an optimistic position because you cannot as a democrat legitimise the illegitimate.”