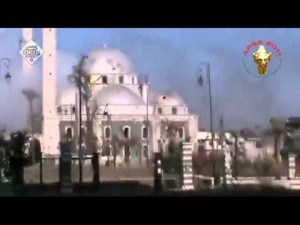 Syrian government forces captured a historic mosque in the central city of Homs on Saturday, expelling rebel forces that had been in control of the 13th-century landmark for more than a year and dealing a symbolic blow to opposition forces, state media said.

The state-run news agency SANA quoted an unidentified military official as saying that troops had seized the Khalid Ibn al-Walid Mosque in the heavily disputed northern neighborhood of Khaldiyeh.

After capturing the strategic town of Qusair near the Lebanon border last month, government troops launched an offensive on rebel-held areas in Homs, Syria’s third-largest city. They have since been pushing into Khaldiyeh and other neighborhoods in the Old City that have been under opposition control since 2011.
The mosque, famous for its nine domes and two minarets, has been a symbol for rebels in the city known as “the capital of the revolution.”

A Homs-based activist who identified himself only by his nickname, Abu Bilal, for fear of government reprisals, said regime forces control more than 60 percent of Khaldiyeh.

The Britain-based Syrian Observatory for Human Rights reported heavy fighting around the mosque, saying the government troops are backed by members of Lebanon’s Hezbollah group. “There are conflicting reports on who is in control of the mosque,” it said.

Activists say the government wants to capture the entirety of Homs to include it in a potential Alawite state, stretching from Homs to the coast, where President Bashar al-Assad could make his last stand if the civil war swings against him. Assad is a member of the Alawite sect, an offshoot of Shiite Islam, while most of the rebels are Sunnis.

Earlier Saturday, SANA reported that talks between the Syrian government and a U.N. delegation tasked with investigating chemical weapons allegations in the civil war had made progress. A joint statement by the Foreign Ministry and the U.N. team that appeared on SANA’s Web site said the meetings had “resulted in an agreement on ways of moving forward” but did not elaborate.

Assad’s government invited a U.N. team to visit Damascus this month after requesting that the world body investigate an alleged chemical attack in Khan al-Assal, a village in the north. The regime and the rebels accuse each other of using chemical agents in the March 19 incident, in which 31 people died.