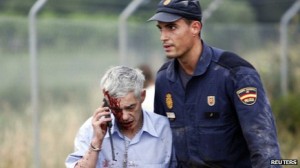 The driver of a train that derailed in Spain killing 78 people has been accused of “reckless manslaughter”, the interior minister has said.

Jorge Fernandez Diaz said Francisco Jose Garzon Amo, who was slightly hurt in Wednesday’s accident, had been taken to a police station.

Mr Garzon is suspected of driving too fast on a bend. Reports say the train was travelling at more than double the speed limit at the time of the crash.

He has refused to answer questions.

At least 130 people were taken to hospital after the accident near the north-western city of Santiago de Compostela.

Thirty were in a critical condition on Saturday.

People from several nationalities were among the wounded, including five Americans and one Briton. One American was among the dead.

PM Mariano Rajoy, who hails from the city of the crash, declared three days of official mourning on Thursday.

All but three of the 78 people killed have now been identified, the BBC’s Alison Roberts reports.

Investigators have been forced to use DNA matches because of the extent of the injuries, our correspondent adds.

Experienced driver
A judge was due to interview Mr Garzon Amo on Sunday, the interior minister said.

“He has been detained for the alleged crimes of reckless manslaughter”, Mr Fernandez Diaz said.

“There are reasonable grounds to consider that he may have been responsible for what happened, which must be established by a judge and the investigation.”

The driver had been under police surveillance in hospital since the accident but he was discharged on Saturday and taken to a police station.

Police said Mr Garzon Amo had refused to answer their questions while he was in medical care.

State rail operator Renfe said the train came off the tracks about 3 or 4km (2-2.5 miles) from Santiago de Compostela station at 20:41 local time (18:41 GMT) on Wednesday.

The accident occurred on the express route between the capital, Madrid, and the port city of Ferrol on the Galician coast, with 218 passengers on board and four crew members.

Footage captured by a security camera shows the train crashing as it hurtled round a bend. 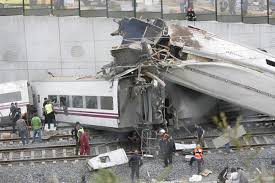 The train’s data recording “black box” is with the judge in charge of the investigation.

Renfe president Julio Gomez Pomar was quoted by El Mundo newspaper as saying the 52-year-old driver had 30 years of experience with the company and had been operating trains on the line for more than a year.

Mr Pomar said the train had no technical problems.

The derailment happened on the eve of Santiago de Compostela’s main annual festival where thousands of Christian pilgrims were expected to flock to the city in honour of St James.

The local tourism board cancelled all festivities as the city went into mourning.

Some trains have now begun running on the tracks despite some passengers’ hesitation, our correspondent says.

According to official figures, the crash is one of the worst rail disasters in Spanish history.