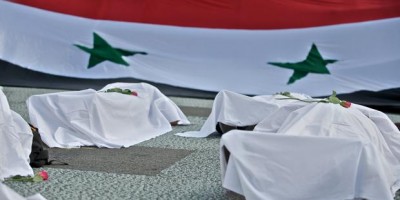 Civilians in the vicinity of opposition fighters’ bases in the governorate of Tartus are at risk of summary execution by pro-government forces, Amnesty International said in a new briefing today.

Following the deliberate killing of 13 members of the same family in the village of al-Baydah, the organization urges the Syrian government to immediately end all extrajudicial executions.

“The killing of 13 civilians from the same family, including women and children in one village is deplorable,” said Philip Luther, Amnesty International’s Middle East and North Africa Programme Director.

The bodies of three brothers were found with bullet wounds just outside their home in the western Syrian village last weekend. Four female relatives and six children between the ages of two and 13 were found dead inside the house. The killings took place shortly after pro-government forces clashed with opposition fighters close to the family home.

The incident came three months after mass killings of more than 250 civilians last May in the same village and the nearby city of Banias.

“This raises serious concerns that civilians in al-Baydah and Banias, particularly those in vicinity of opposition fighters, are being targeted as a deliberate tactic to forcibly displace as many civilians as possible in order to leave opposition fighters more exposed and without a local support base,” Philip Luther said.

“This raises serious concerns that civilians in al-Baydah and Banias, particularly those in vicinity of opposition fighters, are being targeted as a deliberate tactic to forcibly displace as many civilians as possible in order to leave opposition fighters more exposed and without a local support base,”Philip Luther said.

Amnesty International is calling for all attacks on civilians to stop. The organization holds the Syrian authorities directly responsible for violations committed by government-sponsored militias.

Research carried out by Amnesty International into the incidents which took place on 2 and 3 May found that pro-government forces were behind the deaths of at least 138 killed in Banias and 130 in al-Baydah.

According to testimonies from survivors and eyewitnesses gathered by the organization, attackers carried out house-to-house raids rounding up inhabitants in al-Baydah and Banias. Unarmed men, women and children were lined up in the streets and shot at close range. Others were shot dead in their homes. An unspecified number of homes were also looted and set on fire.

A woman whose husband and two sons were killed in al-Baydah, described how 10 men in military fatigues kicked in the door to their home. One stabbed her husband with a bayonet. She was repeatedly threatened with rape and her two sons, husband and other men were then dragged outside and shot dead in the street.

Another survivor described how he and a friend were detained as they tried to escape on the Latakia-Tartus highway. Men dressed in military uniforms dragged them to a checkpoint and threw them on the ground face down. Then they began kicking, stamping and beating them.

“They beat us so hard I thought I was going to die,” the survivor said.

He then told how he and his friend were doused in petrol and set alight:

“[They] brought a big two-litre-size bottle with petrol, poured it over Lou’ay and lit him on fire…within seconds as he was falling, they shot him in the head and he collapsed. There was still a little amount of petrol left in the bottle so they poured it on me and lit me up… I was on fire …I started taking off my clothes, my jacket…then I ran towards the farms… Then, they started shooting at me… I kept running and running… I don’t know how I made it.”

In the Ras al-Naba’ district of Banias eyewitnesses described seeing bodies piled up in the streets and civilians being rounded up by pro-government forces. One resident said he saw a family, including a woman and two children, crouching in a corner by a wall as the pro-government forces opened fire at them. The bodies later appeared to have been burned.

“Pro-government forces seem to be targeting civilians in these areas with total impunity,” said Philip Luther.

“Investigators from the United Nations must be granted immediate access to Syria in order to investigate all civilian killings since the uprising began in 2011.”

Photo: Civilians continue to be targets of abuse in Syria.