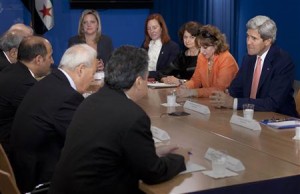 The head of Syria’s opposition told U.S. Secretary of State John Kerry on Thursday the country’s situation was “desperate” and called for the United States to arm the rebels quickly and to push harder for a political settlement.

President Barack Obama, having withdrawn U.S. troops from Iraq and seeking to wind up the U.S. war in Afghanistan, has been reluctant to get involved in the conflict in Syria.

However, U.S. congressional panels this month agreed to a White House plan to provide arms to the rebels despite lawmakers’ questions about its chances of success and concerns the arms might be used against Western targets.

A U.S. official has said funding for the classified program runs out on September 30, when the U.S. fiscal year ends. That means the White House will have to seek Congress’ blessing again for arming the rebels, the official said, possibly setting up a renewed confrontation over Washington’s policy on Syria.

“The U.S. commitment of military support to the Supreme Military Council is vital, but it needs to happen fast, and in a way that allows us to defend ourselves and protect civilians,” Ahmed al-Jarba, the Syrian National Coalition’s newly elected leader, said in a statement released as he met Kerry in New York.

“The situation in Syria is desperate. We urgently need American action to push the international community to demand a political transition,” he added. “American leadership and drive is essential to end this war and bring the democracy that the large majority of the Syrian people want.”

Jarba and three other senior SNC members – Burhan Ghalioun, Najib Ghadbian and Michel Kilo – are in New York to meet informally with the 15-member U.N. Security Council on Friday.

The Syrian rebels are frustrated that U.S. plans to send weapons to them have been held up by congressional concerns.

Saudi Arabia, Qatar and Turkey have been supplying the rebels with arms, security sources and diplomats say.

“Military and violent actions must be stopped by both parties, and it is thus imperative to have a peace conference in Geneva as soon as possible,” U.N. Secretary-General Ban Ki-moon said after meeting with Kerry on Thursday.

The United States, Russia and the United Nations are still working to convene a meeting in Geneva between the Syrian government and opposition groups to try to broker a peace deal.

So far, attempts to organize a so-called “Geneva II” peace conference on Syria to revive a political transition plan agreed in the Swiss city in June 2012 have been futile. U.N. diplomats say it is looking increasingly unlikely that such a conference will take place anytime soon, if at all.

Kerry told reporters that his almost hour-long meeting with the Syrian opposition leaders had been “constructive.”

“The Syrian opposition committed that they believed Geneva II is very important and they agreed to work over the course of the next couple of weeks to pinpoint the terms, the conditions under which they think it could work,” he said.