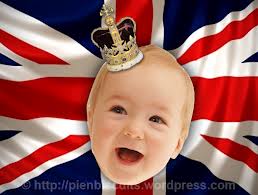 Get ready for a 62-gun salute, let the fireworks and street parties commence: The royal baby has arrived, and it’s a boy.

Prince William and Duchess Kate’s first baby, a future monarch, was born today at 4:24 pm local time in London’s private St. Mary’s Hospital, the palace announced. The announcement said the baby weighed 8.6 pounds, and WIlliam was present for the birth.

The name was not immediately announced and may not be known for up to a week.

The news was supposed to be first announced in the traditional manner, on fancy paper with a Buckingham Palace letterhead on an easel at the palace front gates. But it was dark by the time the birth came, so the palace sent out an electronic press release first. Then the news went up on the royal Twitter feed and websites, proclaimed from every TV and computer screen in the country.

But great-grandmother Queen Elizabeth II was the first to get the news from her grandson, by encrypted phone to the palace, and just in time, too. She’s scheduled to leave on her annual vacation at her Balmoral estate in Scotland at the end of this week.

In other words, the birth of the royal baby was a model of the careful blend of traditional and modern exemplified by this royal couple in the dozen years they’ve been a couple.

The baby arrives just short of 27 months since William and Kate were married in a spectacular ceremony at Westminster Abbey on April 29, 2011. The nine months of her pregnancy have been chronicled by the British and world media with excruciating detail and growing excitement about the first royal heir to be born in 31 years, since William himself was born to Prince Charles and Princess Diana.

(In fact, the last time the easel-and-note was used to announce a royal birth was for William.)

The baby moves immediately to third in line to the throne, behind father William and grandfather Charles. The queen is 87 and celebrating her 61st year on the throne.

The past few weeks saw rising royal-baby fever in Britain, with hopes high that the birth would provide an estimated $360 million boost in the flat British economy. Meanwhile, royal-baby doodads, such as Will and Kate masks, poured into shops for use at the street parties soon to break out all over the country.

The baby arrived a little late , based on a mid-July due date. Unlike the majority of births in Britain, no one, not even the parents, knew the sex of the baby until the birth.

The baby was the second royal heir to be born in a London hospital, the same one where William was born in 1982 (as well as other recent royal babies not close in line to the throne). The Lindo Wing of St. Mary’s is a favorite birthing destination of London’s rich and famous, with estimates of the cost of a natural birth in a private suite as high as $15,000.

William was in the delivery room, as was his father when he was born. He is taking two weeks off for paternity leave.

Many details about the birth were unclear, and some of the speculation was a bit unseemly. Kate had planned a natural birth, being “not too posh to push,” as the Daily Mail put it. Did she employ a “hypno-birth” or some other birthing strategy to dull pain? Will she breast-feed the baby?

It seems likely the couple will take the baby and stay for a few weeks at Kate’s parents’ estate in the country, where there is a nursery. The couple live in a small apartment at Kensington Palace when they’re in London and are not expected to move into more palatial digs until the fall.

If they stay at the Middletons’ mansion in Bucklebury, Berkshire, that would mark the first time a royal heir spent the first few weeks of life outside a royal palace or estate. These details matter to the British.

Britain learned that the duchess had gone into labor just minutes after she checked in and settled at the hospital. In the age of Twitter, it was considered impossible to keep the news under wraps for long, so the palace announced it. (The palace was forced to announce Kate was pregnant ahead of schedule when she experienced acute morning sickness early in her pregnancy and had to be hospitalized.)

Palace press officials had arranged for a theatrical ritual if the baby was born during daylight hours: After the birth, the formal notice, signed by her doctors, would be brought out the front door of the hospital, handed to a driver and then driven with a police escort through London to the front of Buckingham Palace, where it would be placed on the easel. The birth of a royal heir is rare enough to warrant the trouble, palace officials said weeks ago.

But if the baby were born in the middle of the night? No midnight runs to the palace, no police escort. The news would go out in an electronic news release and the notice on the easel set up in the morning.


The newest little royal was named HRH Prince George of Cambridge, with Alexander Louis thrown in for good measure, his parents, Prince William and Duchess Kate, announced Wednesday, two days after his birth. He’ll be a future King George VII.

But royal-baby mania goes on. Next up: The christening and the naming of the godparents. Prince Harry, 28, is sure to be included, and probably Kate’s sister, Pippa Middleton, 29, but most royal children usually have multiple godparents. The baby’s grandfather, Prince Charles, had eight; William had six.

The ceremony probably won’t take place until the fall because great-grandparents Queen Elizabeth II and Prince Philip will be on their annual vacation in Scotland starting Friday.

The private ceremony will likely take place at Buckingham Palace in the chapel or the Music Room, where Charles and William were christened. Also possible: Windsor Castle, where Harry was christened.

The hot picture: The gathering of the families, especially the one of the queen with three generations of her heirs.

George is a name hefty with history for a boy jokingly described as hefty {8 pounds, 6 ounces ( 3.8 kg) } by his proud papa. St. George is the patron saint of England, but most likely the name is a nod to George VI and George V, the queen’s beloved father and grandfather. Louis comes from Prince Philip’s uncle, Lord Louis Mountbatten, who also was close to grandfather Prince Charles.

Alexander could be either a reference to old kings of Scotland, or it’s the male version of Alexandra, a top girl name contender, the name of a past queen consort who was one of the baby’s many royal ancestors.

The palace said Wednesday there was no particular significance to these names; they’re just the ones the couple likes.

But less beloved King Georges included German-born George I, who couldn’t speak English; mad George III, who lost the American colonies; and his son George IV, whose life was one drunken scandal after another.