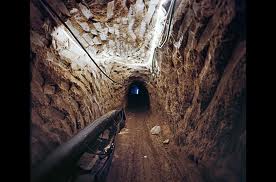 About 80 percent of tunnels used to smuggle goods and arms into the Gaza Strip from Egypt are “no longer functioning” due to a crackdown by the Egyptian military after it ousted President Mohamed Mursi this month, a U.N. official said on Tuesday.

U.N. Middle East peace envoy Robert Serry told the U.N. Security Council that the Gaza Strip was experiencing “some serious shortages of fuel and basic building materials for which the tunnels had become the primary entry point due to severe restrictions on imports via the official crossings and the higher cost of fuel available from the West Bank and Israel.”

Cairo moved to close the tunnels after militants in the Egyptian Sinai desert killed 16 of its soldiers a year ago. Egypt said some of the gunmen had slipped into Sinai from nearby Gaza, an accusation denied by the Islamist Hamas authorities.

The tunnel crackdown has gathered pace since the Egyptian military removed Mursi from power earlier this month. Mursi’s short-lived rule had already disappointed Hamas, since despite their shared ideology he appeared to be in no rush to open the Gaza border.

“As a result of these actions against illegal activity, according to some estimates, 80 percent of the tunnels are no longer functioning,” Serry said.

Hamas, which taxes much of the traffic through the underground passages, has been hit hard by the losses. Ordinary Palestinians, many of them dependent on U.N. aid handouts, have seen prices for staple goods skyrocket.

“While the only Israeli crossing for goods … has remained open and is handling increased quantities of consumers’ goods, we are concerned that already difficult economic and humanitarian conditions in Gaza will further deteriorate, if access into Gaza through legal crossings of basic commodities like building materials is not liberalized,” Serry said.

Israel still maintains strict control of all imports into Gaza to prevent arms reaching Hamas, which refuses to recognize the Jewish state and has often clashed with it. Under international accords, merchandise cannot be imported via Egypt.

Ala Al-Rafati, the Hamas economy minister, said on Sunday that tunnel closures since June had cost Gaza around $230 million – around one-tenth of the gross domestic product of the territory, where the unemployment rate among its 1.7 million residents is more than 30 percent.