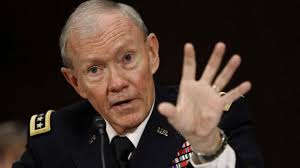 The Pentagon has prepared military options for responding to the Syrian crisis ranging from bombing targets inside the country to deploying thousands of ground forces to secure chemical weapons sites, the chairman of the Joint Chiefs of Staff said in a letter to the chairman of the Senate Armed Services Committee.

Gen. Martin Dempsey made clear that he was just presenting options and the decision is for civilian leaders to make.

Dempsey’s letter to Sen. Carl Levin, chairman of the Senate Armed Services Committee, is the most comprehensive public description yet of the stark choices the administration faces in responding to a civil war that has lasted more than two years, has led to the deaths of 100,000 and has confounded U.S. policymakers.

Dempsey provided the options in response to a request from Levin and Sen. John McCain of Arizona, a ranking Republican member of the committee, which is considering his nomination for a second term as chairman.

Dempsey came under fire last week from McCain, who sharply questioned Dempsey during his confirmation hearing. Dempsey had been reluctant to publicly discuss options while the White House is still reviewing them. McCain has advocated for a stronger response to the civil war in Syria.

The White House has been reluctant to get too deeply involved in the conflict. The U.S. government is providing non-lethal aid to rebels and recently the White House said it would begin providing arms and other support for rebels.

The options outlined by Dempsey would involve a much deeper involvement by U.S. forces, carrying with them high costs and significant risks.

The options outlined by Dempsey include:

• Train, advise and assist the opposition. Ground troops would be used to train rebels in tactics and the employment of weapons. The number of troops required ranges from several hundred to thousands. It would require establishing safe zones outside Syria and would cost an estimated $500 million a year initially.

The plan risks inadvertently helping extremist groups who are among the rebel groups fighting the regime of Bashar Assad, Dempsey said. It could also provoke cross border raids by Syrian government forces and could result in insider attacks against U.S. forces.

• Stand-off strikes. Aircraft and missiles would be used to attack hundreds of Syrian government military targets, such as air defense systems and regime air and naval forces.

This option would require the United States and its allies to muster “hundreds of aircraft, ships, submarines, and other enablers,” Dempsey wrote. It risks provoking retaliatory strikes by the Assad regime and could also result in inadvertent civilian casualties, he said.

• No-fly zone. This option would be designed to ground Assad’s aircraft, preventing them from attacking civilians and rebels. It would also stop Assad from supplying his forces by air. This option would require knocking out the Syrian air defenses and attacking Syrian aircraft on the ground and in the air. It could cost as much as $1 billion a month for a year.

This option could result in the loss of U.S. aircraft, he said. It may also fail to reduce violence or shift the balance of power on the ground, since Assad’s forces rely heavily on mortars and artillery — not only aircraft — to attack rebels.

• Buffer zones. This option calls for the establishment of sanctuaries for rebel forces outside Syria, most likely in neighboring Turkey or Jordan. The zones would allow rebels to train and humanitarian aid could be distributed to refugees.

“Thousands of U.S. ground forces would be needed, even if positioned outside Syria, to support those physically defending the zones,” Dempsey wrote. It would also require a limited no-fly zone to prevent attack from Assad’s aircraft. The cost would exceed $1 billion a month.

The risks include Assad’s forces firing artillery into the zones and killing refugees. “The zones could also become operational bases for extremists,” Dempsey wrote.

• Control chemical weapons. This plan calls for destroying portions of Syria’s stockpile of chemical weapons, interdicting their shipment around the country and seizing and securing weapons components. It would require establishing a no-fly zone and launching air and missile strikes “involving hundreds of aircraft, ships, submarines and other enablers,” Dempsey said. “Thousands of special operation forces and other ground forces would be needed to assault and secure critical sites.”

The costs could exceed $1 billion a month, he said.

“Once we take action, we should be prepared for what comes next,” Dempsey wrote.