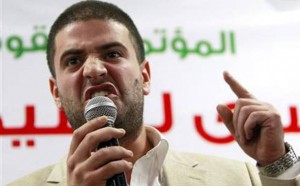 The family of the ousted Egyptian President Mohammed Morsi has accused the army of abducting him.

His daughter Shaimaa told a news conference in Cairo that the family was taking legal measures against the army.

Mr Morsi has been held at an undisclosed location, without charge, since being ousted from power on 3 July.

The family said it held the military responsible for the former leader’s “safety and security”.

The statement is the first from Mr Morsi’s family since he was deposed from office.

“We are taking local and international legal measures against Abdul Fattah al-Sisi, the leader of the bloody military coup, and his putschist group,” Shaimaa Morsi told reporters.

The family was appealing to the International Criminal Court to launch an investigation into the events leading up to his removal from power, she said.

One of Mr Morsi’s sons, Osama, said: “What is going on is a violation of human rights and a scandal in every sense of the word.”

He described the manner in which the military were holding Mr Morsi as an “abduction”.

The family had had no contact with the former president since he was ousted, he said.

Mohammed al-Damati, a leading Egyptian lawyer and supporter of Mr Morsi, said it was a breach of the former president’s human rights to hold him without charge.

It continues to hold almost daily street protests in Cairo.

Several countries, including the United States, have called for Mr Morsi’s release.

But Egypt’s interim authorities insist he is being held in a “safe place”.