Syrian Refugees urge Kerry, US to do more to help 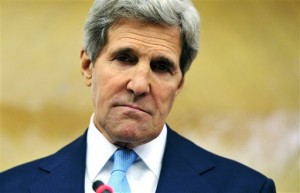 Visiting the Zaatari refugee camp in northern Jordan, Kerry met six representatives of its 115,000-strong population, all of whom appealed to him to create no-fly zones and set up protected humanitarian safe havens inside Syria.

In Jordan on his sixth trip to the Middle East as secretary of state, Kerry flew Thursday to the Zaatari camp north of Amman, just south of the Syrian border. He was accompanied by Jordanian Foreign Minister Nasser Judeh.

Kerry, who spent his time at the camp’s administrative base and did not tour the living quarters for security reasons, met with six refugees who appealed for the U.S. and others to do more militarily to support the opposition. During the 40-minute meeting, they expressed their anger at what they called inaction and indifference on the part of the international community.

“We are begging you for a no-fly zone,” said Jamalat Abu al-Hariri, who fled her home in Daara, the Syrian city closest to Zaatari. The refugees who met with Kerry included three more women and a man from Daraa and one woman from Homs.

“A lot of different options are under consideration,” Kerry responded. “I wish it was very simple. As you know, we’ve been fighting two wars for 12 years. We are trying to help in various ways, including helping Syrian opposition fighters have weapons. We are doing new things. There is consideration of buffer zones and other things but it is not as simple as it sounds.”

Another refugee, who asked not to be named for security reasons, said: “Mr. Secretary, if the situation remains unchanged until the end of Ramadan this camp will become empty. We will return to Syria and we will fight with knives.

“You as the U.S. government look to Israel with respect,” she said. “Cannot you do the same with the children of Syria?”

After the meeting Kerry told reporters he understood the refugees’ concerns but stressed that the U.S. is the largest provider of humanitarian aid to the Syrian people, both inside the country and in camps.

“I think they are frustrated and angry at the world for not stepping up,” he said. “If I was in their shoes I would be looking for help wherever I could find it. I share their passion and frustration for the plight that they face on a day-to-day basis.”

Killian Kleinschmidt, the camp manager for the U.N. High Commissioner for Refugees, said the refugees’ stories are getting worse.

“The conflict has reached a level of brutality that is unbelievable,” he told Kerry, who asked questions about the camp’s administration, security and living conditions.

Kleinschmidt said every family can tell stories of rape, torture, arrest and disappearances. Children draw “horrible pictures of destruction,” he said. Of the total camp population, 60,000 are children and there are 10-12 births a day.

The camp houses about 115,000 people, making it the fourth largest city in Jordan, which is now home to more than 600,000 Syrian refugees and is struggling to cope with their presence. Turkey and Lebanon are also hosting hundreds of thousands of refugees. The United Nations has called it the worst humanitarian crisis in decades.

The Zaatari camp was set up in July 2012. At the high point in April, an average of 1,500 people arrived each day. The current population is down from a high of nearly 130,000 because some people are leaving — some to go back to join the fight, some to tend to properties in areas that are relatively safe and some into Jordan proper if they can prove they have relatives already there.

But people are still arriving, although in much smaller numbers than before; most Syrians who lived closest to the border are already in Jordan and the new arrivals are coming from farther away. One hundred arrivals Wednesday night had spent 17 days on the road coming from the Homs area, about 200 miles away. The start of Ramadan may also play a role in the reduced influx of refugees.