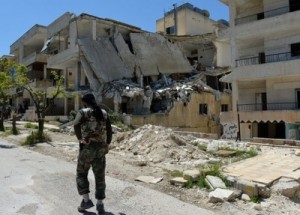 A senior member of the Free Syrian Army is reported to have been killed by a rival rebel group linked to al-Qaeda.

Kamal Hamami, of the group’s Supreme Military Council, was meeting members of the Islamic State of Iraq and the Levant “to discuss battle plans”.

A Free Syrian Army spokesman said he received a call from the group saying they had killed Kamal Hamami.

It is part of an escalating struggle within the armed uprising between moderates and Islamists.

The BBC’s Paul Wood says a civil war within a civil war is building within the opposition as the two sides engage in a battle that is partly over the spoils and partly ideological.

Kamal Hamami, also known as Abu Basir al-Ladkani, was in charge of a key brigade within the Free Syrian Army (FSA).

He is believed to have met members of the Islamic State of Iraq and the Levant in the port city of Latakia to inform them of a planned offensive in the area, before being ambushed and shot dead.

“The Islamic State phoned me saying that they killed Abu Basir and that they will kill all of the Supreme Military Council,” FSA spokesman Qassem Saadeddine told Reuters news agency.

The FSA was formed in 2011 by army deserters based in Turkey and is said to have some 40,000 members.

Although they have had some successes in the fight against President Assad’s forces, they say they will be unable to win the war unless they acquire more sophisticated weaponry.

In recent months, Western and Arab nations have agreed to step up support for moderate Syrian rebels in their battle against President Bashar al-Assad’s forces.

But many in the West are nervous about heavy weaponry falling into the hands of radical groups.

Al-Qaeda in Iraq announced in April that it was merging with the Syrian Islamist group al-Nusra Front to form the single Islamic State of Iraq and al-Sham (the Levant).

The al-Nusra Front – which had gained a reputation for discipline and honesty – rejected the merger though not its allegiance to al-Qaeda.

The leader of al-Qaeda, Ayman al-Zawahiri, has urged its fighters to strive for an Islamic state in Syria.

The spread of Sharia in rebel-held areas has alarmed the moderate members of the opposition, who, though Muslim, do not want a religious state.