Gang throws rivals to their deaths from top of a building

A bloodthirsty gang is filmed flinging r­ivals to their deaths from the top of a building as violence spirals out of control in Egypt.

Horrific scenes captured on a mobile phone and posted on YouTube show a group of men surrounded by captors in the north-east city of Alexandria, the Sunday People can report.

Sickeningly, the victims are tossed head-first from a ledge. They land on the ­concrete roof below, where they are beaten and left for dead.

Clashes between opponents and supporters of deposed President Mohamed Morsi intensified yesterday, leaving 36 people dead. British tourists were feared to be at risk of terrorist attack last night after the head of al Qaeda, Ayman al-Zawahiri, issued a call to arms after the military coup ousted Islamist Morsi.

In a chilling statement, he called for sharia law, claimed democracy had failed and vowed to target Christians, who he said were involved in “a war on Islam”.

It led to concerns about the safety of tourist areas popular with Britons. 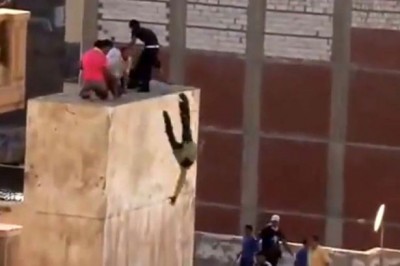 Islamist terror group Ansar Al Sharia, which was linked to the killing of the American ambassador to Libya, said it would gather arms and start training for the imposition of Islamic rule.

More than 1,000 people were injured as fighting swept the country yesterday.

A running battle took place in Cairo and 12 people died when Islamists opened fire at an anti-Morsi rally in Alexandria.