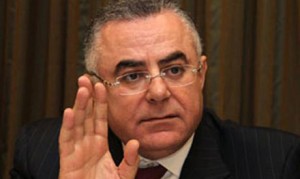 Egypt’s budget and balance of payments and have reached a state of crisis in the two and a half years of political and economic turmoil since veteran leader Hosni Mubarak, was toppled in a popular uprising in 2011.

Neither the governor, nor another senior central bank official were immediately available for comment.

The United Arab Emirates pledged $3 billion in aid for Egypt in 2011 that has yet to be delivered. In May of this year it said it would take time for the money to be transferred.

Qatar has lent Egypt more than $7 billion since Mursi was elected president a year ago, but other Gulf countries have remained aloof. Analysts said they were wary of Mursi’s Muslim Brotherhood.

The ousted President named last February Hisham Ramez, a former deputy central bank governor, as the new head of the Central Bank of Egypt (CBE) after accepting the resignation of longstanding CBE governor Farouq El-Oqda, who had headed the bank since 2003.