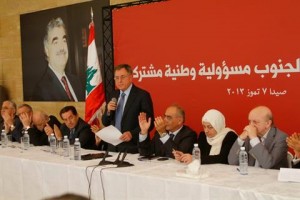 Following a meeting of the March 14 alliance in the southern Lebanese city of Sidon, former Lebanese Prime Minister and Sidon MP Fouad Siniora called for a transparent investigation into reports of Hezbollah fighters arresting and torturing residents of Sidon when the Army conducted a military operation in Abra, east of Sidon against the radical Salafist Sheikh Ahmad Assir and his armed loyalists.

“What happened in Abra two weeks ago raised several questions that remain unanswered up until now. That’s why we call for a transparent and just judicial investigation so that the whole truth can be revealed in order to comfort people and allay their concerns,” Siniora said and vowed to prevent the Army from engaging in militia practices.

The meeting of March 14 officials was held at the residence of Sidon MP Bahia Hariri in Majdalyoun, east of Sidon, in an expression of solidarity with the city.

The Army launched its operation against Assir in Abra after his supporters killed several soldiers at a checkpoint near the Mosque that he commanded. Eighteen soldiers and at least 28 gunmen were killed in the 25-hour operation. Assir’s whereabouts remain unknown.

Siniora, who is also the leader of the Future Movement parliamentary bloc, reiterated his condemnation of the attack against the Army, calling it a “criminal” act.

Siniora said al-Assir comitted a “big sin” by fighting the army, but he added that the cleric had “fallen in the trap set for him.”

“Whoever committed a crime against the army should be held accountable,” he stressed

“But at the same time, we do not accept that Hezbollah’s militia fights alongside the Army and targets innocent residents of the city,” he added.

“We do not accept assaults against others, or against state establishments, particularly the Army, but at the same time we do not accept that others assault us … with the participation of a group from Army Intelligence, not only in Sidon, but in Beirut, Tripoli, Arsal, Akkar and other areas.”

Siniora added that hundreds of Sidon residents had witnessed Hezbollah fighters deploying in large numbers in the Army’s entire field of operations in Abra.

“They took part in shelling, raiding, investigations, harassing people and looting some houses. I have a question here: Did Hezbollah prepare for a military operation it knew was going to happen?” he asked.
The Abra battles could have been avoided by vacating the apartments of Hezbollah in Sidon, he said.

The apartments were one of the main reasons for Asir’s campaign against Hezbollah, according to media reports. Hezbollah vacated the apartments following the Abra clashes.

Siniora said that many questions raised by the March 14 coalition over the Abra clashes have gone unanswered so far.

“How did the Army allow this [violations]? Why and who is responsible? … we have information rather than impressions that those arrested in Sidon were subjected to torture by Army Intelligence personnel in Sidon or by Hezbollah members who humiliated them based on their sect,” Siniora said.

“How were crimes against the city’s people allowed?” he asked.

Siniora also praised the Army’s arrest of a number of soldiers who appeared in a video allegedly torturing a person detained over the Abra fighting.

The video, circulated on social media in the past few days, allegedly shows soldiers severely beating and stepping on a handcuffed detainee, asking him about Assir’s whereabouts.

The Army said in a statement Saturday that soldiers involved in the case were arrested.

“After videos posted on some electronic websites showed a number of Army soldiers beating up and humiliating a detainee over the Abra incident, the Army command launched a probe into the case,” the statement said.

“The soldiers were arrested and it [Army] will subject those involved to the harshest punishments. The Army command stresses that it will not ignore violations of such a type,” added the statement.

Last month, the Army launched a probe into a similar incident after the Abra clashes.

Siniora said the March 14 coalition would not allow that some soldiers to behave like militia members.

“If some Army soldiers and officers behave like a militia, how will the country be and how will laws be implemented properly?” he asked.

Siniora said that just as the Army defended its dignity in Sidon, it should do the same in other areas.

“We hold onto the state of law … We reject all illegitimate arms and call for keeping them under the control of the state,” he said.

Harb appealed for armed groups to “lay down their weapons to prevent Lebanon’s destruction.”