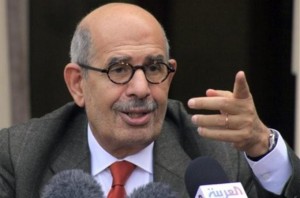 The Tamarod (rebellion) movement, which engineered mass protests culminating in the overthrow of Islamist president Mohamed Morsi on Wednesday, made the announcement on Saturday after talks with Adly Mansour, Egypt’s new interim leader.

The news of the appointment was greeted with cheers outside Cairo’s Ittihadiya presidential palace, where opponents of Morsi frantically waved Egyptian flags and honked car horns.

It came as the Muslim Brotherhood staged a new show of force in Cairo’s Nasr City district to demand that the military restore Morsi, after dozens of people died and hundreds more were injured in 24 hours of violence.

Al Jazeera’s Jamal Elshayyal, reporting from Nasr City, said the reaction from the Morsi’s camp to the appointment of Elbaradei was one of complete rejection and anger.

“One of the protesters here said that the appointment of ElBaradei is a move directed at appeasing the United States and that he served them well, allowing for the invasion of Iraq when he was in the IAEA and will now be their puppet again – we all know he is a puppet.

“Another person said that ElBaradei was even too scared to nominate himself in the elections. That’s how little support he has – he needed the army to put him in office. So to sum up the mood here: it is rejection, anger and dismissal,” Elshayyal said.

Egypt’s second largest Islamist group, the Al Nour party also opposed the installment of ElBaradei. A senior party official threatened that his group would leave the army-backed political road map over the appointment.

ElBaradei, who won the Nobel peace prize in 2005 for his work with International Atomic Energy Agency, returned to Egypt in 2010 and became a prominent opponent of former president Hosni Mubarak in the lead-up to the 2011 uprising that overthrew him.

Al Jazeera’s Sherine Tadros, reporting from Cairo, said the main question is how much power ElBaradei will have in his new role as interim prime minister.

“[ElBaradei’s appointment] is not really a surprise. He was sitting next to General Abdel Fattah al-Sisi when he announced the ouster of President Morsi, which already indicated that ElBaradei was to take up an important role in the new government,” Tadros said.

“Many people are asking ‘why now’ has he taken this post when he was offered it before under the military and said it was a sham democracy and that he didn’t want to be part of the process. And now that he is taking up the post, people are asking what sort of guarantees has the military given ElBaradei for him agree on this role,” she added.

ElBaradei, who resigned from his political party Al Dostour to focus on new role, was scheduled to be sworn in at 8pm (18:00 GMT).