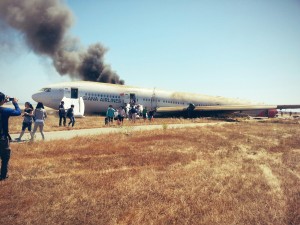 Anthony Castorani, who saw the flight land from a nearby hotel, said he saw the plane touch the ground then noticed a larger plume of white smoke.

“You heard a pop and you immediately saw a large, brief fireball that came from underneath the aircraft,” he told CNN. “It began to cartwheel.”

Video from the scene posted on YouTube showed dark gray smoke rising from the plane, which appeared to be upright.

Evacuation slides could be seen extending from one side of the aircraft, from which there was no apparent smoke.

There were a few clouds in the sky around the time of the crash, with temperatures around 65 degrees, according to the National Weather Service.

The airport is about 12 miles south of downtown San Francisco.

Asiana Airlines is one of South Korea’s two major airlines, the other being Korean Air.

CNN’s Dana Bash, who was heading to the airport at the time of the crash, said she noticed smoke emanating from the runway. She said she had not noticed any arrivals or departures since the crash.

Update: The airline which is   based in Seoul, South Korea stated on its website that its Boeing 777 can carry between 246 to 300 passengers.

Update 2: Emergency services have reported that 290 passengers, 12 crew members and one infant were all on board the plane at the time of the accident.

Police and fire services say everyone who was on board has been accounted for. 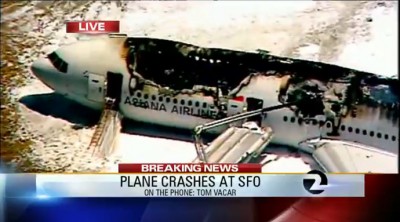