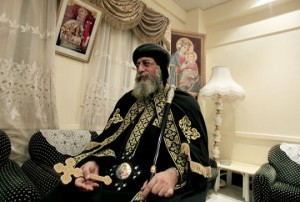 A Coptic Christian priest in Egypt’s Northern Sinai has been shot dead, in what could be the first sectarian attack since the military overthrow of Islamist Mohammed Morsi.

The priest, Mina Aboud Sharween, was attacked in the early afternoon while walking in the Masaeed area in El Arish.

The shooting in the coastal city was one of several attacks believed to be by Islamist insurgents that included firing at four military checkpoints in the region, the sources said.

Saturday’s attacks on checkpoints took place in al-Mahajer and al-Safaa in Rafah, as well as Sheikh Zuwaid and al-Kharouba.
The violence follows attacks in which five police offers were killed in El Arish on Friday.

Running battles between those supporting the overthrow of Mr Morsi and those demanding his reinstatement were most intense in Cairo on Friday where tens of thousands took to the streets. The two sides briefly fought for control of the northern entrances to Tahrir Square.

The Muslim Brotherhood’s leader Mohammed Badie addressed a mass rally in the Egyptian capital on Friday and called for troops to defy their generals and restore Mr Morsi to power. He is believed to be under arrest.

Mr Badie said the national leaders who announced the new government on Wednesday night did not represent their followers.

He singled out the Grand Iman of Al-Azhar University and the Pope of the Coptic Christian church, a provocative move in light of the country’s rising sectarian tensions.

“Millions will remain in the squares until we carry our elected president, Mohamed Morsi, on our shoulders,” he told a cheering crowd. “We are his soldiers and we defend him with our lives.”

He said he would not be deterred “by threats or detentions, or the gallows”. He urged soldiers to obey their supreme commander – President Morsi – rather than the defence minister, Gen Abdulfattah al-Sisi.
The Telegraph