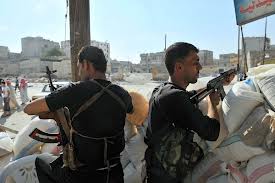 While millions flood Cairo’s streets, the war in Syria rages on – and may soon reach a critical turning point. A new Syrian army offensive launched in recent days against the strategic city of Homs is a vital step in an effort to secure a corridor linking Damascus to the Alawite hinterland, building on the government’s conquest of Qusayr early last month. The U.S. decision to arm Syrian rebels, announced last month, raises a key question: at this point, can the United States still make a difference?

The answer is yes. The president has certainly changed his “calculus,” as he promised to do, causing political shock waves and setting the stage for potentially stronger action down the road. The decision is important in another respect, too: it has provided political and diplomatic cover for stronger action by U.S. allies. In a ministerial meeting in Doha June 21, Saudi Arabia and Qatar reportedly agreed to provide specific quantities of the shoulder fired anti-aircraft and anti-armor weapons the rebels had begged for, a first. This would probably not have been possible without the United States’ own arms commitment.

Urgent action is needed. The bloody conflict in Syria has approached another grim milestone: 100,000 deaths since the conflict began – more than 36,000 of them civilians – according to the Syrian Observatory for Human Rights. More than 18 percent of Syria’s population, or 4.25 million people, is internally displaced, and that number is growing. The refugee burden on neighboring states is too: according to the United Nations, more than 1.7 million refugees have fled to neighboring countries, with more joining them every day. In Jordan, 20 percent of the country’s population could consist of Syrian refugees by the end of the year, a percentage that could double by the end of 2014. Violence is spiking inside the country and Syria’s neighbors are increasingly dragged in as well; an anti-Assad Sunni militia in Lebanon recently clashed with the Lebanese army, killing at least a dozen.

More from GPS: What if al-Assad prevails?

Arms alone will help rebel forces significantly, but more is needed. This will depend on U.S. leadership. Humanitarian safe zones in the north and south of the country could help protect at least some of the internally displaced persons and ease the work of international humanitarian agencies. Allied imposition of no-fly zones is a militarily vital step that could turn the tide of the war. The U.S. also needs vigorous on-the-ground liaison with rebel military leaders to ensure well-coordinated deliveries of weapons into the hands of fully-vetted rebel groups. U.S. pressure on allies is needed to ensure arms promises are fulfilled quickly, and that rebel forces are adequately trained in the weapons’ use.

The U.S. public, unwilling to countenance American involvement in another Middle East conflict, is emphatically against arming the rebels. According to a recent Pew Research Center poll, “70 percent oppose the U.S. and its allies sending arms and military supplies to anti-government groups in Syria; just 20 percent favor this.” But the poll also concluded that “the public continues to pay very little attention to news about Syria.” Well, wake up, because here’s what at stake: the possibility of a crucial Middle East country dominated by Iran and its ally Hezbollah, no friends, to put it mildly, of the United States.

Iran, Hezbollah and Russia are all committed to a strategic victory for al-Assad, his regime, the implicit defeat of the United States and the destruction of the forward momentum of the largely pro-democracy Arab Spring. Al-Assad’s survival in power, after a brutal campaign against his citizens that involved bombing parts of his own capital, would strengthen the resolve of other such dictators – not just in the Middle East – to adopt his successful tactics even against non-violent protesters.

By vigorous action, the United States can change the military facts on the ground, and the political calculations of the al-Assad regime and its allies. Prospects for a diplomatic solution can even be improved: the proposed Geneva II conference, already slipping further over the horizon, stands a chance of success only if the rebels appear at the table in a position of military strength.

No one is calling for boots on the ground (a post-conflict peacekeeping force may be another matter) or an open-ended financial and military commitment. And no one should underestimate the difficulties of bringing this war to a conclusion that favors elements who seek a pluralistic system that fairly represents all Syrians. U.S. arms for the rebels are a good starting point for a rejuvenated policy, and should be the beginning of greater political commitment to a new Syria by the United States and its allies.

By: Charles Dunne, Special to CNN