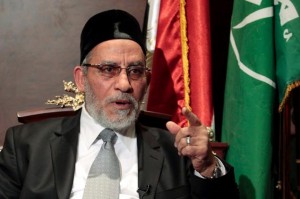 The leader of Egypt’s Muslim Brotherhood, Mohamed Badie, was attending a protest rally in Cairo on Friday and would address it shortly, the movement’s political wing said in a statement.

The prosecutor’s office ordered Badie’s arrest on Thursday following the overthrow by the military of President Mohammed Morsi, a Brotherhood member. Security forces said he was detained, but the Brotherhood later denied that.

The rally, near a mosque in suburban Cairo, was attended by thousands of Islamist supporters.

Essam El-Erian, the deputy leader of the Brotherhood’s political wing, told the crowd the movement rejected Morsi’s removal and would not deal with the new, military-backed authority: “We will never accept this coup against legitimacy,” he said. “No honourable person will deal with this.”