This is not a coup, but the will of Egypt’s people 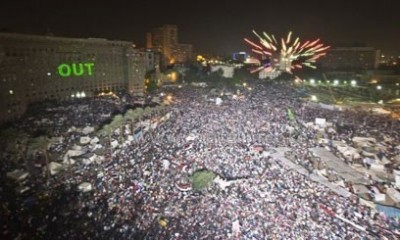 By: Amira NowairaThe overthrow of President Morsi may seem like a military coup. But to all intents and purposes it is not. The call for Morsi’s ousting was made by millions of Egyptians who went out on the streets for four days in a row, raising Egyptian flags and chanting one word directed at him: “Erhal”, meaning, “leave, depart”. Without the presence of those millions on the streets and their determination to get rid of Mohamed Morsi and his Muslim Brotherhood, the military would certainly not have intervened.

The military has acted on a clear popular mandate, as was the case with the overthrow of Hosni Mubarak. It is true that the Supreme Council of the Armed Forces made huge mistakes when they assumed power after Mubarak. But with the appointment today of the head of the supreme constitutional court, Adli Mansour, as an interim president until proper elections take place, the military has given a strong signal that a different path would be followed this time. It is up to the Egyptian people to oversee the new transition and make sure it does not deviate from the right path envisaged by the millions.

The overthrow of President Morsi may seem like a military coup. But to all intents and purposes it is not. The call for Morsi’s ousting was made by millions of Egyptians who went out on the streets for four days in a row, raising Egyptian flags and chanting one word directed at him: “Erhal”, meaning, “leave, depart”

Egypt made a huge mistake in electing a Muslim Brotherhood president. This is what most ordinary Egyptians now realise. Within one short year, Morsi has managed to alienate the larger part of the population, with the exception of Brotherhood members and supporters. Not only did he fail to deliver on the economy, but he also made enemies of almost everyone: the judiciary, the media, the religious authorities of the leading al-Azhar mosque, the Coptic church and ordinary Egyptians whose way of life and livelihood seemed to come under threat.

The most dangerous aspect of Brotherhood rule was probably its discourse of fear and loathing. In fact, Morsi wagging menacing fingers against Egyptians has become emblematic of his brief rule. Incitement against Copts, Shias and anyone who dared oppose him was rampant and unchecked. On the platform of a pro-Morsi rally, Egyptians were threatened with doom and gloom. “There will be a sea of blood if people dare challenge Morsi’s presidency,” vowed one of his supporters.

After an excruciating year of mismanagement, sectarian rhetoric and state violence, it is understandable that Egyptians should rise in full force against a regime that seemed to hold them hostage. Morsi has shown himself to be incapable of governing or even understanding the fundamentals of managing a modern state. What he succeeded in doing was to dispel any illusions that Egyptians might have had about the Muslim Brotherhood as a morally and spiritually superior faction, a myth the party has relentlessly propagated for decades. Morsi reneged on all the promises he made during his election campaign and never shied away from producing yet more lies. His pledge to respect the law of the land proved to be no more than meaningless words as he went on the rampage against the judiciary and appointed a public prosecutor that people nicknamed the “private prosecutor”.

Morsi and his Brotherhood have been wrecking Egypt for a whole year, and are now screaming blue murder because they are not allowed to continue to do so with impunity.