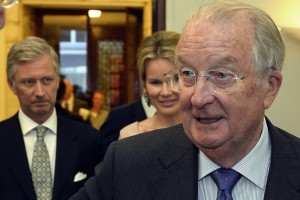 Albert II, King of the Belgians, abdicated in a televised address to the nation after almost twenty years on the throne, saying he will step down July 21, Belgium’s national day.

“It’s with emotion that I address every one of you today,” he said in the broadcast. “I’m in my 80th year, an age never before reached by my predecessors…my age and health no longer permit me to exercise my functions as I would wish to.”

Albert, 79 years old, will be succeeded by his eldest son, Prince Philippe, 53, who has studied at Oxford and Stanford. He married Mathilde d’Udekem d’Acoz in 1999 and the couple have four children.

“Prince Philippe is well prepared to succeed me, he and Princess Mathilde have my every confidence,” he said. “It’s with serenity and confidence that I share this decision.”

The Belgian monarch has a more political role than many of his European peers. When the country was without a federal government for 541 days after the 2010 elections, King Albert had to appoint successive negotiators. His behind-the-scenes role helped pave the way to the formation in December 2011 of a six-party coalition government led by Francophone socialist Elio di Rupo.

Still, the protracted negotiations took a toll. After canceling his vacation during the talks, the king at one point had to hold meetings at his country retreat, Chateau de Ciergnon, while he recovered from surgery to remove a small carcinoma on his nose.

Belgium will hold federal elections next year, meaning that it will fall to Philippe to appoint the various politicians to lead negotiations in the sensitive postelection period. While he is widely seen as more capable than his gaffe-prone brother Laurent, some have reservations about how ready he is to be king.

“He gives the impression of being a little bit square,” said Professor Paul De Grauwe, a former Belgian senator, and now an academic at the London School of Economics. “He struggles against the perception in Flanders that he’s not up to the job.”

Still, Mr. De Grauwe notes, “He’s very responsible, he takes it very seriously,” and if he capitalizes on his “beautiful queen and lovely children…he can find a new popularity.”

The North-South divide — always a contentious issue in Belgium — extends to the monarchy as well.

The N-VA, by far the most popular party in prosperous Northern Flanders, ultimately wants a separate Flemish republic and sees him as partisan to the French-speaking Walloons. The outgoing king stirred controversy when he mentioned prewar populist movements in his Christmas speech, seen by many as a dig at the Flemish separatists.

“The king leaves his functions in the same way that he assumed them, on the death of [his brother] King Baudoin; with dignity and love for our country,” Mr. di Rupo told reporters. “Over the years, together with Queen Paola he conquered the hearts of the Belgians.”

The prime minister said work would start at once for “multiple celebrations” on July 21. Following the king’s announcement, crowds were waving Belgian flags outside the Royal Palace in Brussels.

“King Philippe will keep the country united—along with the Red Devils,” said Matthew Bruynseels, a 15-year-old student, using the nickname for the national soccer team. “It’s been 20 years that he’s not just a king for the government but for the people.”

Albert isn’t the first monarch to step down this year in Europe. In April, neighboring Dutch Queen Beatrix formally abdicated after a 33-year reign. Her son, King Willem-Alexander, is the Netherlands’ first male monarch in more than a century.

“It’s a bit sad to see the king go since he’s brought our country through 20 years, but I’m happy that it’s a personal choice and not death,” Redwan Mettioui, 37, a lawyer said. “I think it’s an admirable and courageous choice.”

André François, 46, an urban planner for city of Brussels said: “The king’s abdication is really nothing, just a continuation of the royal line.”

Photo: King Albert II of Belgium, front, along with Crown Prince Philippe and Princess Mathilde at a concert in Brussels on June 17.