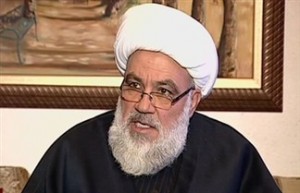 Former Hezbollah Secretary General Sheikh Sobhi Tufaili said that Iran pushed Hezbollah into the Syrian civil war and this could open the door to a Sunni-Shiite war.

He said the civil war in Syria has turned into a sectarian war between the Alawites , of which Syrian president Bashar al Assad is a member and the mostly Sunni rebels.

The former Hezbollah chief said at his home in the town of Baalbeck,( a Hezbollah stronghold) that the intervention of Hezbollah “could threaten the very existence of the resistance and this is not a respectable position to be in.”

He added that he never expected Hezbollah to join the war but predicted that Assad will fall. He said “Hezbollah could delay the fall of Assad but could not prevent it”.

“As the former Secretary General of Hezbollah , I know that the decision to push Hezbollah into the Syrian war was made in Iran. He added “Political decsions are always 100% Iranian although Iran doesn not get involved in all the little details .