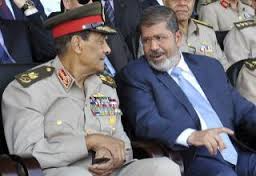 The Egyptian army has given the country’s politicians a 48 hours ultimatum to resolve the current political stalemate, further emboldening opponents of Mohamed Morsi, the embattled president, and pushing the most populous Arab nation deeper into uncertainty.

The army statement, delivered on state television on Monday, called on political groups to resolve the situation.

“The armed forces repeat their call for the people’s demands to be met and give everyone 48 hours as a last chance,” it said.

“The national security of the state is in severe danger,” it added, warning that if there was no resolution the army “will be obliged by its patriotic and historic responsibilities… to announce a road map for the future and the steps for overseeing its implementation, with participation of all patriotic and sincere parties and movements.”

It described the mass protests on Sunday that brought out millions of Egyptians demanding President Morsi’s resignation as “glorious”.

Opponents of Morsi viewed the army statement as an endorsement and continued to flood the streets to press on the president to step down.

Large protests continued on Monday in Cairo, and in cities outside the capital, including Alexandria, Mahalla, Suez and elsewhere.

Morsi supporters criticised the ultimatum as an attempted coup. A group of pro-Morsi parties, calling themselves the “coalition to defend legitimacy,” called for mass protests in support of the president during a late-night press conference.

“We reject attempts to use the army to attack the legitimacy of the president,” said Safwat Abdel Ghani, a senior member of the Gamaa al-Islamiyya.

Gehad el-Haddad, a senior adviser to the Freedom and Justice Party of Morsi’s Muslim Brotherhood, said the military was trying to paper over its own poor performance during the transitional period after Mubarak’s ouster.

“The right of the people to choose the leader of the country will not be jeopardized by anyone, even by those with guns,” he said in an interview
Morsi’s office in a statement early on Tuesday morning said the president was not aware of the ultimatum before it was issued and insisted that he was working to reconcile the country’s political factions and resolve the crisis.

Hours after the ultimatum, army helicopters flew over Tahrir Square trailing large Egyptian flags, a move interpreted by protesters as a show of support.

“The army and the people are one hand,” protesters chanted.

Tamarod, the grassroots campaign behind the latest anti-Morsi protests, praised the statement, saying it showed the military was on the side of the people.

“I don’t think the army will control this transitional period,” said Eman el-Mahdy, a spokeswoman for the group. “I think they should play the role to prevent further bloodshed.”

The military issued a second statement during the day, stressing that it did not support coups, and that it would not be part of the country’s political leadership.

Morsi also lost the support of Sami Enan, his military adviser, who resigned on Monday and said the army would not “abandon the will of the people.”

Thousands of the president’s supporters have been staging their own sit-in since Friday in Cairo’s Nasr City neighbourhood. They are defending the president’s legitimacy, they say, and argue that the only way to remove the democratically-elected Morsi is through the ballot box.

In a speech to pro-Morsi protesters on Monday night, Mohamed el-Beltagy, a leading member of the Brotherhood, warned that the group would only “on our dead bodies” accept the president’s ouster – which he called an “armed coup”.