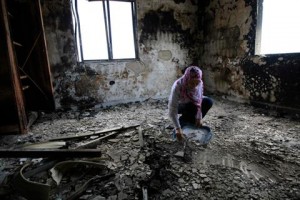 Hezbollah members vacated on Thursday two apartments in the the area of Abra of the southern city of Sidon that were the center of clashes between supporters of the radical Sunni cleric Ahmad al-Assir and Hezbollah-affiliated members, AFP reported.

The apartments are few meters away from the headquarters that was used by Assir, before the army took it over following violent clashes that killed at least 17 soldiers.

Assir , on numerous occasions complained about the Hezbollah apartments and claimed that the militant group stocked weapons in them and used them to monitor him.

Asir, 45 who remains at large supports the overwhelmingly Sunni rebels fighting to topple Syrian President Bashar Assad, while Hezbollah has joined the Syrian army in its crackdown against the Syrian rebels.

A source close to Hezbollah told AFP that the party emptied the apartments “in order to restore peace in the city of Sidon”. It is not clear why it took Hezbollah so long to vacate the apartments , specially since it could have saved the city and the country some human lives.

Clashes erupted early Sunday afternoon following the Army’s arrest of Assir’s bodyguard Fadi Beirouti and his brother-in-law, but on Monday the army seized control of Assir’s headquarters after his supporters battled the army for two days, resulting in the death of 17 soldiers