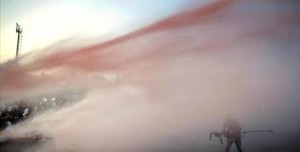 Turkish anti-terrorism police detained 20 people in raids in the capital Ankara on Tuesday in connection with weeks of anti-government protests across the country, media reports said.

The unrest began at the end of May when police used force against campaigners opposed to plans to redevelop a central Istanbul park. The protest spiraled into broader demonstrations against Prime Minister Tayyip Erdogan and his government.

There have been daily protests in Ankara since then.

Police raided some 30 addresses in the capital, targeting people suspected of being members of an unspecified terrorist organization, broadcaster CNN Turk reported. Erdogan has said the demonstrators were manipulated by “terrorists”.

CNN Turk said police carried out the operation after identifying people who had attacked officers, businesses and public property. A police spokesman in Ankara said his department had no information on the raids.

Protests have lessened in recent days after a period of violent clashes, but police fired water cannon to disperse thousands in Istanbul’s Taksim Square on Saturday and used tear gas in clashes with smaller groups in surrounding streets.

Erdogan has held a series of mass rallies across the country since the trouble started, dismissing the protesters as pawns of Turkey’s enemies and calling on his supporters to back his party in municipal elections in March.

The protests have highlighted divisions in Turkish society between religious conservatives who support Erdogan and more liberal Turks who have swelled the ranks of demonstrators.

Four people have been killed in the unrest, including one policeman, and about 7,500 have been wounded, according to the Turkish Medical Association.

Thousands of people marched along a main avenue on the Asian side of Istanbul on Monday night to protest against a court decision to release from custody pending trial a police officer accused of shooting a protester dead in Ankara this month.

Turkey’s handling of the unrest has drawn criticism from abroad. European Union ministers said they hoped to reach an agreement on Tuesday that would delay reviving membership talks with Turkey to signal concern over the issue.