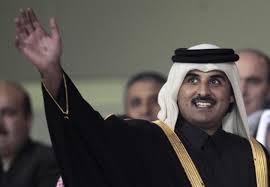 DOHA, Qatar (AP) — Qatar’s ruler said Tuesday he has transferred power to the 33-year-old crown prince in an anticipated move that puts a new generation in charge of the Gulf nation’s vast energy wealth and rising political influence.

The 61-year-old emir, Sheik Hamad bin Khalifa Al Thani, said in a televised address that the decision has been made to step down following weeks of speculation. Now, the British-educated crown prince, Sheik Tamim bin Hamad Al Thani, will begin the process of putting together a new government that may be in direct contrast to the old guard leaders across the Western-backed Gulf Arab states.

Qatar has given no official explanation on the transition, but it is widely believed that Sheik Hamad is suffering from health problems.

Sheik Tamim is not expected to make any immediate policy shifts for Qatar, which has used its riches to propel itself into one of the world’s most politically ambitious countries. It has served as a powerful player in the Middle East, including key support for rebels in Libya last year and now in Syria. Qatar also has broken ranks with other Gulf states to offer help to the Muslim Brotherhood, which rose to political dominance in Egypt.

In an important sign of continuity and shared goals, the outgoing emir and Sheik Tamim stood shoulder to shoulder and greeted members of the ruling family and others following the address. Sheik Tamim has been closely involved in all key decisions in recent years and his father is expected to remain a guiding force from the wings.

“Sheik Tamim will be driving his father’s car, which is already programed on where to go,” said Mustafa Alani, a political analyst at the Gulf Research Center in Geneva.

But the transition — a rarity in a region where leadership changes are nearly always triggered by deaths or palace coups — also sends a message the wider Middle East. It appears a sweeping response to the Arab Spring upheavals and their emphasis on giving voice to the region’s youth, and reinforces Qatar’s bold-stroke political policies.

Under Sheik Hamad, who took power in a bloodless coup in 1995, Qatar has been transformed into a political broker and a center for global investment with a sovereign fund estimated to be worth more than $100 billion. Its portfolio includes landmark real estate, luxury brands and a powerful presence in the sporting world. Tiny Qatar also defeated rivals including the U.S. to win the rights to host the 2022 World Cup.

Qatar has played a role as mediator in conflicts such as Sudan’s Darfur region and regional disputes including Palestinian political rifts. Qatar this week hosted a Syrian opposition conference attended by U.S. Secretary of State John Kerry and is the venue for possible U.S.-led peace talks with Afghanistan’s Taliban.

Sheik Tamim became the next in line to rule in 2003 after his older brother stepped aside.