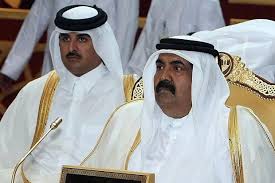 Here are some key points on Tuesday’s leadership transition in Qatar from the 61-year-old emir to his 33-year-old son, Sheik Tamim bin Hamad Al Thani.
Qatar’s ruler said Tuesday he has transferred power to the crown prince in an anticipated move that puts a new generation in charge of the Gulf nation’s vast energy wealth and rising political influence. Sheik Hamad bin Khalifa Al Thani, said in a televised address that the decision has been made to step down.

WHY IS QATAR IMPORTANT?

The Gulf state of Qatar is small _ only about a third the size of Belgium _ but has a carved out a significant global profile in the past decade.

Qatar has huge oil and gas riches that feed one of the world’s largest and most acquisition-hungry sovereign wealth funds, estimated at more than $100 billion. Its holdings have included stakes in London’s Harrods department store, the French luxury conglomerate LVMH Moet Hennessy Louis Vuitton and soccer’s Paris Saint-Germain. Qatar also has pledged billions of dollars to help businesses in debt-crippled Greece and Italy.

Qatar’s political aims are equally ambitious. It has served as mediator for peace efforts in Sudan’s Darfur region and among rival Palestinian political factions. It is currently hosting envoys from Afghanistan’s Taliban for possible U.S.-led talks seeking to stabilize the country before the American troop withdrawal next year. Qatar has played a central role in the Arab Spring by providing critical aid for Libyan rebels last year and is now a leading backer of Syria’s opposition.

Qatar’s government founded the television network Al Jazeera in 1996, which transformed news broadcasting in the Arab-speaking world. The state-run Qatar Airways is among the world’s fastest-growing carriers.

IS SUCH A TRANSITION UNUSUAL?

It is exceedingly rare among the ruling Gulf Arab dynasties. Most leaders remain for life or have been pushed out in palace coups. Qatar’s outgoing emir, Sheik Hamad bin Khalifa Al Thani, took control in a bloodless coup against his father in 1995.

The change in Qatar was believed to be prompted by health problems with the 61-year-old Sheik Hamad, but Qatar officials have not publicly disclosed any details.

Yet it reinforces Qatar’s bold political style. The transition to the 33-year-old crown prince, Sheik Tamim bin Hamad Al Thani, appears a direct response to the Arab Spring demands for reforms and its emphasis on giving a stronger political voice to the region’s youth.

WHAT CHANGES CAN BE EXPECTED?

Not many in the short term. The outgoing emir is expected to maintain a guiding hand over Qatar’s affairs for years to come. His son also has been involved in most key decisions in recent years as part of the grooming process.

The most noticeable changes will likely be among the top government posts. It’s expected that Qatar’s long-serving prime minister and others could be replaced as Sheik Tamim puts together his own inner circle.

Another possible new element could be more social media interaction. The British-educated Sheik Tamim was still a teenager when the Internet age began and is well attuned to its influence.

Sheik Tamim also headed up Doha’s unsuccessful attempt for the 2020 Olympics. He could give a boost to a possible return bid for the 2024 Games.